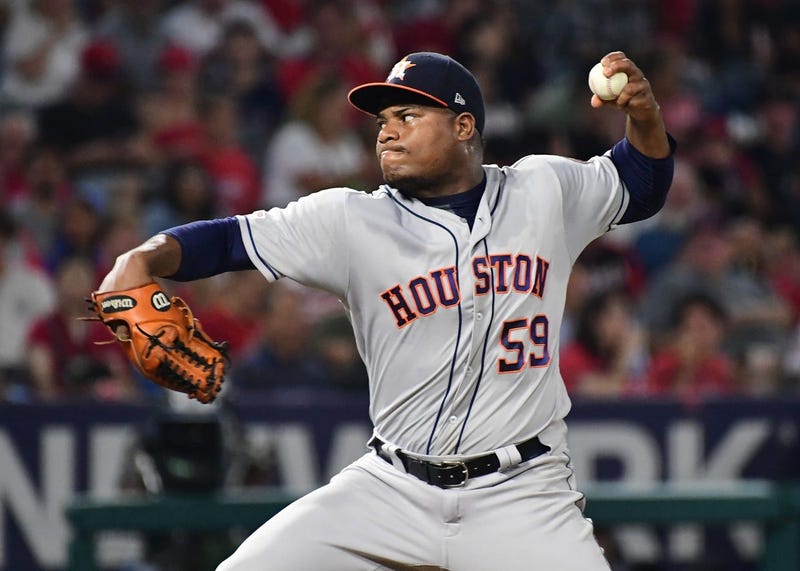 Despite some early struggles, Framber Valdez allowed one run over six innings striking out eight in the Astros 11-2 win over the Los Angeles Angels Sunday afternoon at Minute Maid Park.

Valdez walked two of the first three hitters he faced, but induced an around the horn doubleplay to end the threat, and the Astros responded by scoring a run on Yordan Alvarez's RBI ground out in the bottom of the inning. The Angels tied the game in the second with one out when Andrelton Simmons lined a first pitch curveball from Valdez into the Crawford Boxes for his sixth home run of the season. The Astros lefty retired the next two he faced, but found himself in deep trouble during the next inning.

He walked Luis Rengifo and allowed a single to David Fletcher. He then hit Mike Trout to load the bases, but after a visit from Astros pitching Brent Strom, Valdez buckled down. He struck out Shohei Ohtani and Upton, and got out of the inning when Albert Pujols hit a soft groundball back to him. He retired the side in order in the fourth, and the Astros took the lead in their half of the frame thanks to a two-out RBI single from Josh Reddick.

Valdez worked around two-out walks in the fifth and sixth, his day ended with six innings pitched. Hector Rondon worked a 1-2-3 , at which point the Astros extended their lead. Abraham Toro led off the home half of the seventh with a walk, and after Reddick's sacrifice bunt, Martin Maldonado drove an 0-1 fastball from Ty Buttrey over the wall in left-center for his ninth homer of the season, making it a 4-1 game.

Joe Smith completed a scoreless eighth inning despite allowing a leadoff single to Trout, and the Astros blew the game open with a seven-run bottom of the eighth, capped by Jose Altuve's 24th home run of 2019, tying his career-high.

Chris Devenski sealed the Astros fourth straight win despite allowing one run in the ninth inning, improving them to 85-47 on the season.

Reddick finished with two hits and three RBI, while Michael Brantley extended his hitting streak to 18 games with a single in the eighth.

The loss is the Angels fifth in a row.

After an off day Monday, the Astros will open a 3-game series against the Tampa Bay Rays Tuesday night at Minute Maid Park. Charlie Morton will make his Houston return in the series opener against Justin Verlander.