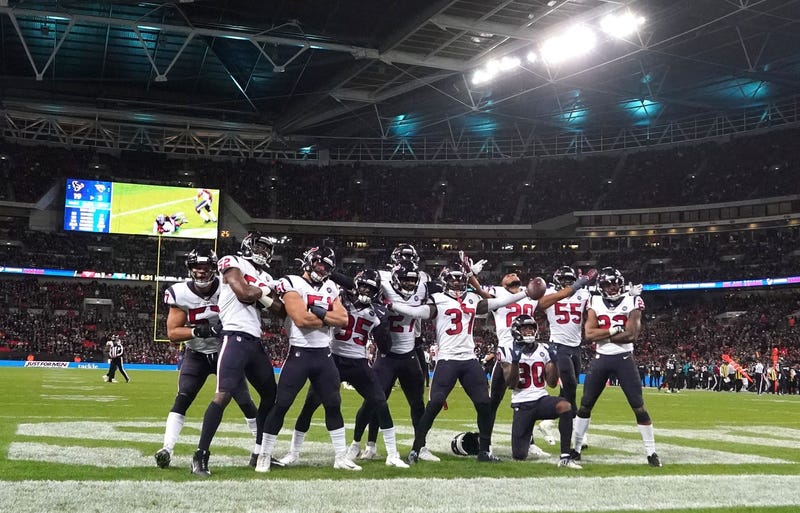 LONDON (SportsRadio 610)- J.J. Watt might be gone, but it doesn't mean the Texans defense is cooked, and in Sunday's 26-3 win over the Jacksonville Jaguars at Wembley Stadium, the unit showed it can survive without its biggest star.

"Credit to the defensive guys," Texans safety Justin Reid said. "We have a next man up mentality. We were prepared to step up to the plate. Really made a statement today that we'll still come out and play great sound fundamental defense, and we'll still find ways to get wins."

In front of 84,771 fans in London, the Texans defense forced more turnovers (four) than it allowed points. The Jaguars lone score came when they ended an 11-play, 63-yard drive at the end of the first half with a Josh Lambo 30-yard field goal, and the key, according to Reid was limiting Jaguars running back Leonard Fournette, who ran for just 40 yards on 11 carries.

"That was the key to the game," Reid said. "Him and Christian McCaffrey get the most touches in the league, so big part of this gameplan was to get (the Jaguars) out of their usual system, get the ball away from him, force him in passing situations and when we got them in passing situations keep Gardner Minshew in the pocket, don't let him scramble around because he makes his biggest plays when he's scrambling around."

The Jags had just three plays that went for over 20 yards, and two of those came when the game was out of reach. Whitney Mercilus believes that's all about fundamentals.

"Doing your job is just about controlling your gap and then helping out, instead of doing too much where you're jumping out of your gap trying to go make a play, but usually that doesn't work."

The Texans defense had trouble generating pressure against Minshew in the first half, but after halftime, they sacked him four times and forced turnovers on the Jags final four possessions.

"D-lineman and the outside linebackers had a great game getting to him, allowing the DBs to rest" Texans linebacker Bernardrick McKinney said. "I really want to give a game ball to them. I really couldn't make any plays because they made a lot of plays.

J.J. Watt isn't coming back this season, but on Sunday, the Texans showed their defense can survive without him.