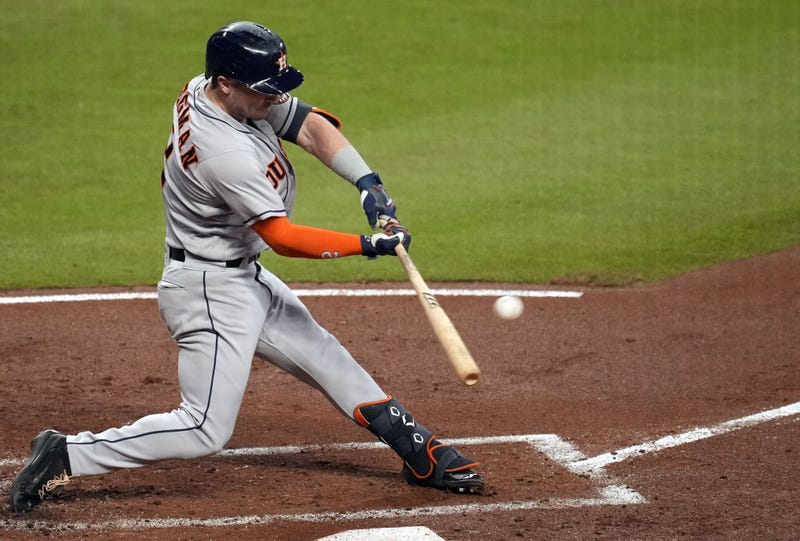 HOUSTON (SportsRadio 610)- Trailing game five of the World Series 4-0, 23 outs away from elimination, Alex Bregman started the Astros comeback by lacing Tucker Davidson's 2-2 fastball into the right-center gap at Truist Park for a double that scored the Astros first run and setup their second.

"He got the biggest hit of the night to me," Astros manager Dusty Baker said on Monday. "Up to that point, at least, to get us back in the game."

Bregman's double was just his second hit in 15 World Series at bats and his second extra base hit in 54 postseason at bats. With the Astros facing elimination on Sunday night, Baker was forced to move a two-time all star with two top four MVP finishes down from the third spot in the Astros order to seventh, and despite his big swing he is likely to stay there.

While his double left the bat at 101.8 MPH, his final four plate appearances of the night were not nearly as successful. he did reach base with a fifth inning walk, but when he put the ball in play, he did so softly.

His third inning fly out had an exit velocity of 88 MPH, his seventh inning pop out was 80.7 MPH off the bat, and his ninth inning ground ball was hit 77.3 MPH. That ball had an expected batting average of .060, which was his best chance at a second hit.

Bregman's offensive slide started before the playoffs. He batted just .113 and slugged .226 over his final 14 games of the regular season, but while Sunday's performance was a step in the direction, Baker says he's not back to his normal self just yet.

"One day doesn't mean that you're out of the woods yet."