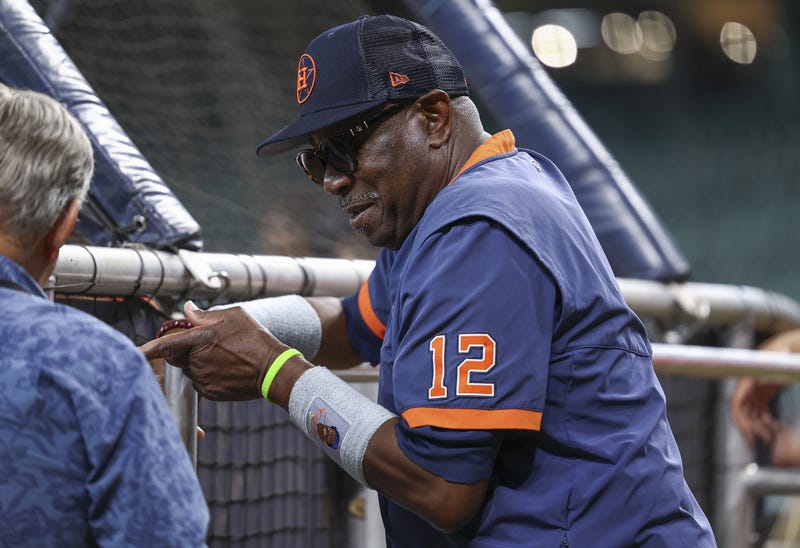 HOUSTON (SportsRadio 610)- Chas McCormick's OPS against left-handed pitchers is a hefty 1.018 thus far this season, so it was a bit of a surprise to see Jake Meyers name penciled in the Astros starting lineup against Rangers lefty Martin Perez.

"I did not ask Dusty that," Astros bench Joe Espada responded when asked why McCormick was starting against the Rangers All-Star pitcher on Tuesday. "He is writing the lineup, but we do have a ton of confidence in Jake and that's why he penciled him in there, I'm sure."

Espada is serving as Astros acting manager while Baker recovers from a bout with COVID-19, and while he is running the team from the game's first pitch to the final out, Baker remains in charge the rest of the day.

"He's itching to get back to to the office," Espada said of Baker. "He really misses being ballpark with the fellas."

Tuesday's game is the fifth Baker has missed since testing positive before Thursday's game in Cleveland. There is no timetable for when he'll be able to rejoin the team, though Baker said in a radio interview on Tuesday that he hopes it will come before the weekend.

The Astros manager can return in 10 days if he's not showing symptoms or if he registers two negative COVID tests 24 hours apart. Espada did not know if he had tested negative yet.

"I know he flew private (back to Houston on Monday) and I know that symptoms are very light right now."

Espada, whose time as Astros bench coach precedes Baker, says the two are in constant contact throughout the day.

"(I) Check in with him in the morning and then when I get (to the ballpark), make sure that everything is ok. Then, after the game I check in with him, make sure we go over the lineup for tomorrow, and then if there's anything else he'll send me a little text before bed."