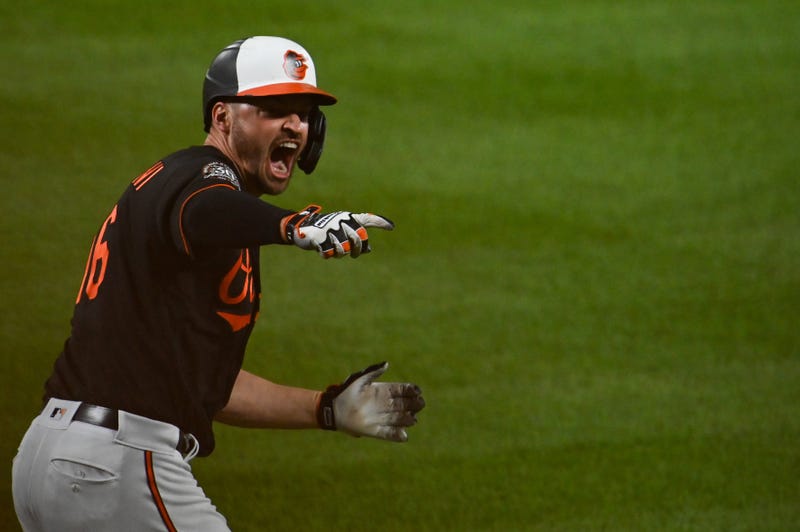 HOUSTON (SportsRadio 610)- Before the Astros failed to scrape across an earned run against a Boston Red Sox pitching staff that entered Monday's game at Minute Maid Park slightly below average, general manager James Click added some thump to underperforming lineup.

Click first acquired Trey Mancini in a three-team trade from the Baltimore Orioles and then landed catcher Christian Vázquez right before he was slated to bat fifth and catch against his team, filling two of the Astros biggest needs.

"They're two guys that we're really excited about bringing into the organization and we think that they can help out the team this year," Click said. "Our focus is, obviously, try to help ourselves in as best a position as we can to compete for a World Series this year.

"One of the most appealing things about(Mancini) is that he hits lefties and righties very well for us, and so in a pinch hit situation late in the game I think he could be a real weapon against both sides."

Mancini, 30, has played both corner outfield positions along with first base this season and throughout his career. He will join the Astros with a .268/.347/.432 slash line, and though his numbers are down a touch in 2022, getting away from what is now a right-handed hitter's graveyard in Camden Yards to the Crawford Boxes will be a shot in the arm.

Vázquez, 31, was on the field when reports of his trade to the Astros first leaked. He continued to take batting practice with his former Red Sox teammates, and briefly spoke to reporters before being ushered away by a Red Sox staffer. His addition will be an important one for the Astros, who have been without Jason Castro for more than a month without an end in sight.

"Just a veteran guy," Click said. "Great game caller, great behind the plate, really works well with the staff. We know that he prepares, we know that he knows the scouting report can execute it, and he's a guy, who having seen him in the AL East for a few years, he's he's never the guy that he want to come up to the plate when there's runners on. He always seems find a way to put the bat on the ball and get those guys in."

It is unknown how much of the catching share he will take from Martin Maldonado, but Vázquez gives the Astros an offensive threat at that position, similar to what Castro provided a season ago. Maldonado, Castro and Korey Lee have combined for a .525 OPS this season, 29th in Major League Baseball. Vázquez will bring a .759 OPS into the Astros clubhouse on Tuesday.

"(Maldonado's) a gamer, he wants to be out there everyday," Click said. "He brings a huge amount of value to the staff, to the game calling, to the execution, but we need to make sure that once we get to August 3 that the guys we have on this roster are able to sustain us for two and hopefully three months, and so making sure that we had options there, veteran options there was a critical component for us."

Maldonado was excited about the addition of Vázquez, noting the two played winter ball together and worked out in the offseason until Vázquez moved to Florida. The two have already spoken and Maldonado said he will be driving his new teammate to Minute Maid Park.

"(He brings) a lot of energy," Maldonado said. "Experience, gamer, a guy that works hard. He brings a lot to this clubhouse, a guy that has won the World Series, played in many playoff games."

The big key to Monday's additions for Click was that he added depth to his team's starting nine and also to its bench. Adding to the appeal of Mancini and Vázquez is their ability to put the ball in play, which is a profile that fits an Astros team with MLB's fourth lowest strikeout rate.

"We definitely want it to lengthen the lineup out and get the options (off the bench)," he said. "They're also both guys that are high contact hitters, which is something that we value. I think it's shown that it has sustainability in the playoffs in particular, and these are two guys who bring a lot of that strike zone control, bat control, bat to ball skills to the plate."

Click swung three trades before the deadline last summer, and made it clear he was not done after completing two on Monday. Sure enough, minutes after finishing his session with reporters, Fox 26 reported the Astros had acquired left-handed Will Smith, who recorded the final three outs of the 2021 World Series, in exchange for Jake Odorizzi. The trade had not been announced as of 1:45 am on Tuesday, but Odorizzi was quick to leave Minute Maid Park after remaining in the Astros dugout through the end of Monday's game.

The Astros are a lock to win a fifth American League West title in six years and find themselves just three games back of the New York Yankees for the best record in the American League. They were already good, but Click made them better on Monday as he takes aim at his team's number one goal.

"We all want the big ring on our finger at the end of the year," Click said. "Today was a day where I feel like we really helped those guys out, and hopefully we can we can continue to do so."