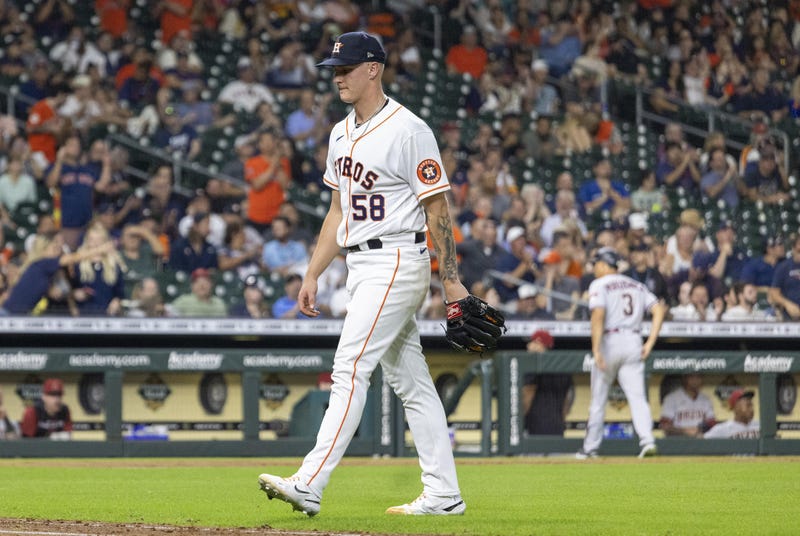 HOUSTON (SportsRadio 610)- Hunter Brown appeared out of the bullpen for the third time since joining the Astros on Tuesday night, but this outing was different than the previous two or any other he's had over the last three years. For the first time since July 15, 2019 the Astros pitcher appeared in a game on less than four days of rest.

"I felt good, my body felt good," Brown said Wednesday. "I'm just trying to get adjusted to the bullpen life, which is slightly new for me. I pitched in tandem stuff out of the bullpen, but it's been more scheduled. Now, it's when they call down just be ready."

Brown didn't allow a run in his one inning of work, but it wasn't the cleanest inning. He allowed a bloop single and issued a pair of walks, needing 27 pitches to record three outs, with only 14 being thrown for a strike. Brown said he wasn't specifically told he would pitch on Tuesday, but he went to the bullpen prepared if needed.

"I treated it moreso like a tandem, backend start," he said. "I do a lot of stuff pregame and then that way I can fire it up quicker when they need me to."

The Astros four-run bottom of the sixth inning allowed Brown more time to warm up, but he said he would've been ready had they been sent down in order.

Despite generating just one swinging strike and a velocity drop of .7 MPH on his four-seam fastball, Brown was happy with his stuff on Tuesday while pitching under somewhat foreign circumstances. He did dial it up to 98 MPH on his last pitch of the seventh inning, which froze Corbin Carroll with the bases loaded. Brown said the velocity drop had nothing to do with the quick turnaround from his last appearance over the weekend in Baltimore.

"Maybe trying to be a little too fine with the fastball, rather than just letting it fly in the zone, but I thought my breaking stuff the velo was still there."

The Astros 24-year old top prospect is more than willing to continue pitching out of the bullpen with October on the horizon.