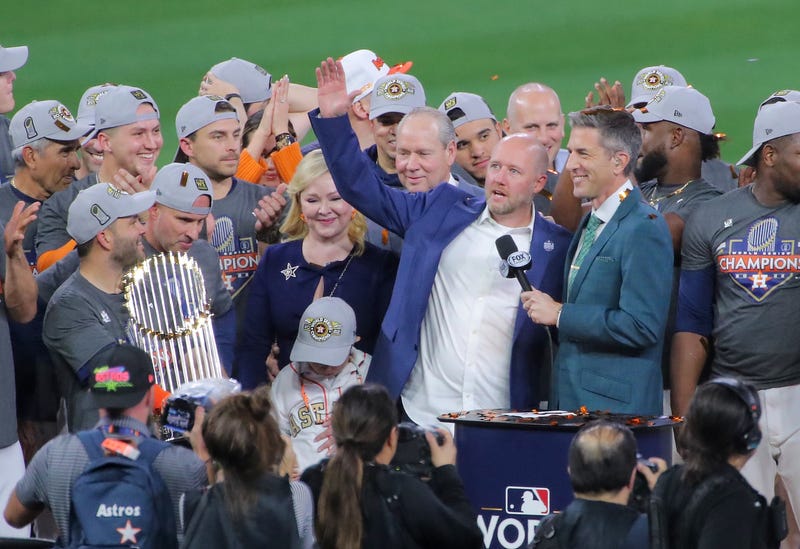 "We had the big parade (on Monday) and was able to sit down with James for a little while and he had to shoot off to the GM's meeting, so we're in discussions and when he gets back we'll complete those discussions," Crane said.

Click is currently representing the Astros at the General Manager's meetings in Las Vegas without a contract, and according to the Houston Chronicle he was not given any advance notice of Wednesday's press conference.

Crane hired Click as Jeff Luhnow's replacement in February 2020, a little more than a week after Baker replaced A.J. Hinch. The two men, who are almost three decades apart in age and come from opposite backgrounds in the sport, have stewarded the Astros through three long postseason runs, coming a game short of a World Series appearance in 2020, two wins short of a World Series title in 2021 before getting over the hump last week.

Crane vetoed Click's deadline acquisition of catcher Willson Contreras for Jose Urquidy at the urging of Baker, but on Wednesday, the Astros manager said Wednesday he and Click have a good relationship.

"We've accomplished some good things together in a short period of time, and so people (are) always looking for if there's some conflict or not getting along, or whatever, but that's not the case."

When the Astros announced Baker would return for the 2022 season, Click was sitting next to him at the press conference. On Wednesday he was nowhere to be found and when asked to evaluate his general manger's performance over the last three seasons, Crane was complimentary but hardly effusive.

"He stepped in and made some good moves. We'll sit down and see where we're gonna end up with James."