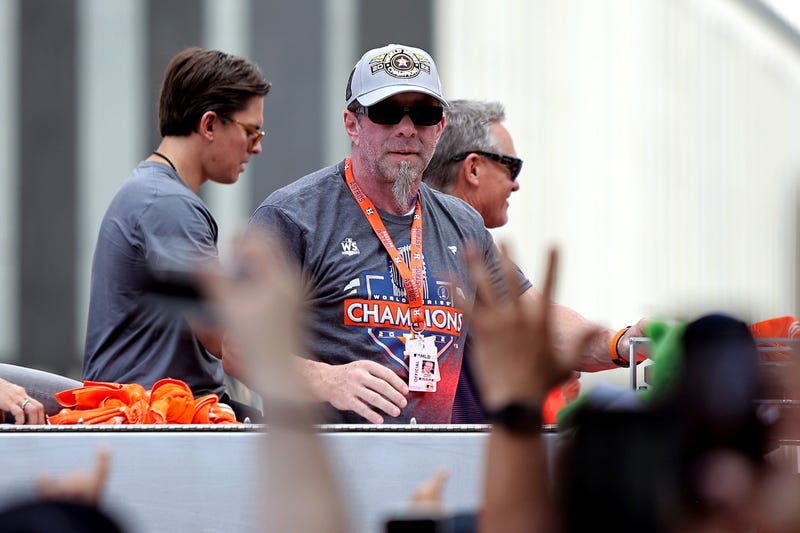 HOUSTON (SportsRadio 610)- When Jim Crane and assistant general manager Bill Firkus flew to Miami to negotiate with free agent first baseman Jose Abreu, they were joined by another first baseman, Hall of Famer Jeff Bagwell. Firkus is serving as the Astros de-factor general manager, but Bagwell is turning into more than just an advisor.

“I’m just a voice of how I see Baseball and how I see the other things that aren’t just numbers,” Bagwell said after Abreu was introduced after signing a three-year contract with the Astros.

Bagwell’s voice has grown louder within the Astros front office over the last year, and while his title remains Community Outreach Executive, Bagwell held court with reporters for 15 minutes after Abreu’s press conference sounding every bit like a high-ranking executive.

“He's a line drive hitter,” Bagwell said of Abreu. “He drives in a lot of big runs. There's a lot of guys that can drive in 80-90 runs, this guy's driven in 120. He drives in big runs, he knows how to do that, and we can get him in our lineup, that can only do stuff to benefit us.”

Bagwell insists he isn’t interested in becoming the Astros next general manager, a job that opened when the team parted ways with James Click three weeks ago, and won’t interview if asked, but there is no doubt he will be involved in baseball operations moving forward.

“I want to do whatever Jim needs me to do,” he said. I'm not pushing myself to do anything. I know I'm involved, I know I enjoy talking the game of baseball, and I certainly enjoy talking about us and how we can get better.”

Bagwell’s involvement in the Astros front office brings questions about the future direction of the team. He’s been a staunch opponent of analytics while serving as an analyst on the club’s television and radio broadcasts, and he reiterated that opposition on Tuesday.

“There are certain things that go on that the numbers can’t explain,” Bagwell said. “This game is played by humans, it’s not played by computers.“

That said, Bagwell did indicate one area where he thinks analytics are important.

"I think analytics is great for pitching. I think they can do a lot of things to help pitchers out: spin rate, different positions in your arm, just different things that they do in pitching I think are great, and we've done a great job developing pitching. "We've done a great job of finding pitching, and then even big league guys that have gotten here have gotten better, so I totally believe in that."

The Astros remain in the early stages of their search to replace Click.

“We’re assembling candidates and talked to a few people,” Crane said. “We’re not in any big rush, I wouldn’t’ expect anything until January. The front office is working fine, as you can see.”

Stearns, a former Astros assistant general manager under Jeff Luhnow, has maintained he intends to remain a consultant with the Brewers through the final year of his contract next season. Ausmus, a former Astros catcher and close friend of Bagwell declined an invitation to return to Mark Kotsay’s coaching staff in Oakland next season in hopes of landing a front office job, and on Tuesday Bagwell endorsed the idea of him returning to Houston.

"I think Brad would be an amazing front office guy. I think he can use analytics and his knowledge of playing to really benefit whatever team he's with."

Bagwell doesn’t appear to be interested in consolidating power within the organization, he just wants to remain in the sport and help the organization he starred for and its owner, who he believes in.

"I'm a Houston Astro. I've been here since 1991, and I think Jim Crane’s the best owner in baseball. That's part of the reason why I do this. (Crane’s) a guy that played in college, that understands the game of baseball, hates to lose, and will spend some money. I mean, you can't ask for more than that, and he's got a passion for it.

“To be a part of it has been nice, whatever part that is, but I care, and I care about the guys. People always ask me in the playoffs when are you gonna smile. There aint nothin’ to smile about, man. I’m grinding. I’m in there in the batter’s box with guys, I’m throwing pitches, I’m calling pitches, but I just love our team, and I just am fortunate this part of my life I’m still involved.”