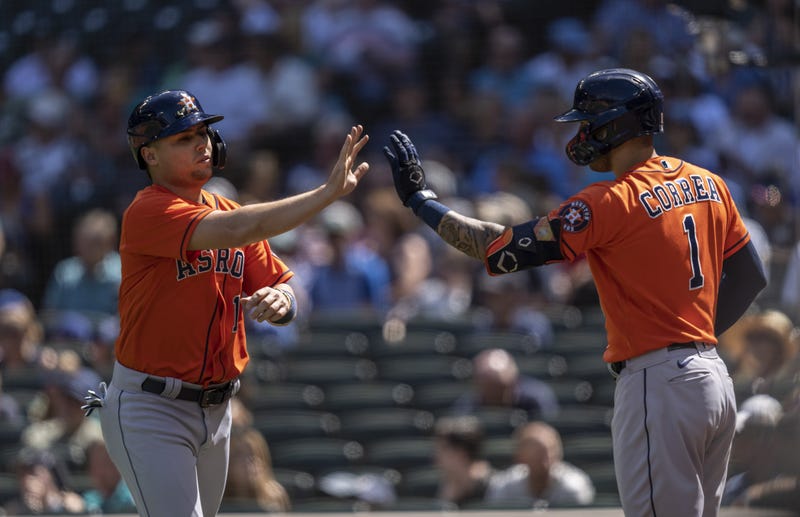 Houston Astros third baseman Aledmys Diaz (16) is congratulated by shortstop Carlos Correa (1) after scoring a run on hit by first baseman Yuli Gurriel (10) during the sixth inning of a game against the Mariners. Photo credit Stephen Brashear-USA TODAY Sports
By The Associated Press

SEATTLE (AP) — Yuli Gurriel singled, doubled and homered to drive in three runs and lead the Houston Astros over the Seattle Mariners 11-4 on Wednesday.

It was the 13th time this season Gurriel has had at least three hits. Carlos Correa also had three hits and Kyle Tucker homered for the Astros, who have won seven of their last nine games.

“You love to see these guys hitting,” Astros manager Dusty Baker said. “It’s a great feeling when you’re scoring, and guys get five at bats and do something with them.”

Starter Jake Odorizzi (4-5) gave up three runs on five hits in 5 1/3 innings. He didn’t give up a hit until the fourth inning, and held Seattle scoreless through five before allowing a couple of home runs.

Kyle Seager got the Mariners on the board in the sixth inning with a solo homer, his third straight game with a home run. Two batters later, Abraham Toro hit a two-run shot, giving him homers in four straight games, including his first two with Seattle.

“My luck this year is when I make a mistake in a spot like that it’s been a homer,” Odorizzi said.

Toro was traded from the Astros to the Mariners before Tuesday’s game and then became the first player ever to homer for and against the same team in consecutive games.

Houston led 8-0 after the top of the sixth, the third time the Astros opened a big lead in the three-game series. After blowing a seven-run lead on Monday and having to hold off a ninth-inning rally on Tuesday, Houston made sure there was little doubt about the outcome.

“We could have had a bad series after that first loss,” Odorizzi said. “For us to flush that and make a statement, it’s important. And good to see out of our guys that there wasn’t any panic out of anybody.”

Yusei Kikuchi (6-6) allowed four runs — three earned — on seven hits over five innings. He is now 0-3 since being named an All Star for the first time in his career on July 4.

“Today the Astros offense and what they were able to do — they just keep grinding at bats. I actually thought Yusei Kikuchi threw the ball pretty good today,” Seattle manager Scott Servais said. “His stuff was not bad at all, it’s a tough offensive club.”

Servais was ejected by first base umpire Hunter Wendelstedt in the fourth inning after arguing about a non-call on a checked swing by Aledmys Diaz. He said he was upset that home plate umpire Adam Beck originally didn’t ask Wendelstedt if it was a swing, and then disagreed with the call of a non-swing.

“From my angle I’m looking at it, clearly he swung the bat. At times the home plate umpire does not see it, but just check,” Servais said.

New Seattle pitcher Tyler Anderson is expected to make his Mariners debut sometime during their weekend series in Texas, Servais said. Anderson was acquired late Tuesday from Pittsburgh in exchange for a pair of minor leaguers. Servais said he was unsure if Anderson would travel to Seattle and then fly with the team to Texas or if he would meet the team in the Dallas area.

Houston activated RHP Rafael Montero before the game, a day after acquiring him in the trade with the Mariners that also sent Kendall Graveman to the Astros.

During the game, the Astros traded for RHP Yimi Garcia from the Miami Marlins, in exchange for RHP Austin Pruitt and minor league OF Bryan De La Cruz.