Thursday evening, Philadelphia and Houston will meet in two sports, both of which will be nationally televised events.

While Thursday had been slated to be an off day for the World Series, Monday evening's Game 3 rainout forced the schedule to be changed. Now, Games 3-5 will be played Tuesday, Wednesday and Thursday at Citizens Bank Park, all at 8:03 p.m. ET. Friday will instead serve as the travel day.

With the World Series currently tied at 1-1, it's possible that either the Phillies or Astros could enter Game 5 with a chance to clinch a World Series title. If that's the case, they'll do so while competing for ratings with Thursday Night Football.

Competing with TNF is one thing, especially when football is unquestionably king in most parts of the United States. But the World Series will be directly competing with another Philadelphia-Houston matchup, as the Texans will host the Eagles at NRG Stadium beginning at 8:15 p.m. ET.

There had been some thought that MLB would consider starting Game 5 of the World Series earlier -- say, 6:00 ET -- to avoid having their entire game competing against Eagles-Texans. Commissioner Rob Manfred explained Monday evening why MLB ultimately opted not to go in that direction:

MLB Commissioner Rob Manfred says playing game 5 of the World Series Thurs afternoon,given the Eagles play the Texans Thurs night in Houston,didn’t work:“For the World Series an important consideration for us is having the biggest audience we can get.That’s a prime time audience” pic.twitter.com/YcXurRKwQ2

Certainly, rightsholders likely had a say in this. If TNF was still on FOX -- as it was from 2018 to 2021 -- perhaps there would have been more of a discussion about staggering start times. But with Amazon Prime Video now the exclusive home of TNF, FOX had no motivation to try to schedule the World Series around football. 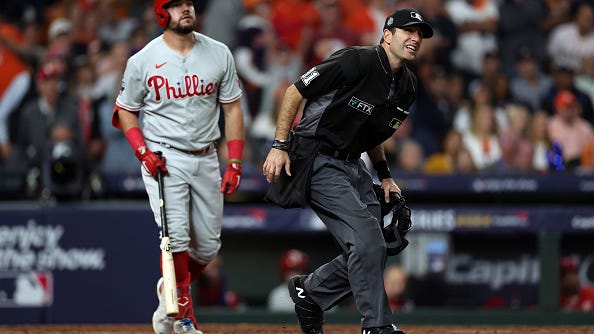