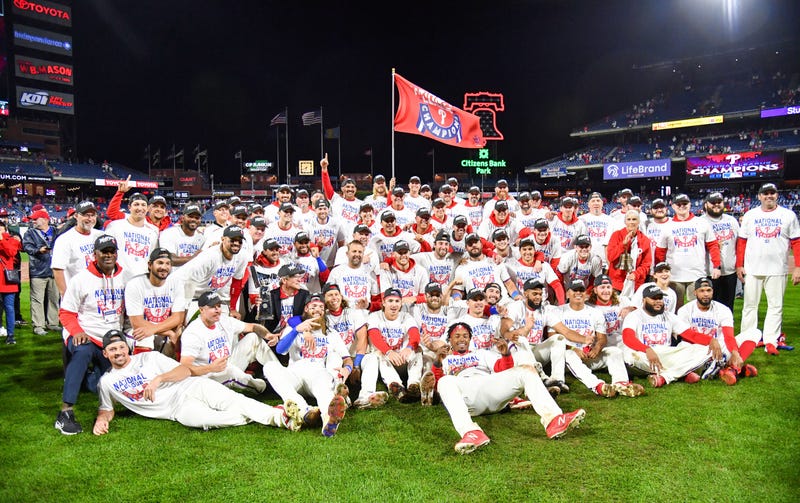 The Phillies dropped to 21-29 when they lost to the Giants on May 31, and two days later they replaced manager Joe Girardi with Rob Thomson. The Phillies immediately won eight straight games, and if you want to know why they are playing in the World Series, just go back to that decision.

“They were just stiff and a tick late on everything when Girardi was there because they were probably really worried about making mistakes,” an NL East coach told SportsRadio 610. “Then, they just loosened up and started playing more care-free and together.”

This coach, who prepared for and faced the Phillies 19 times over the course of the regular season equated Girardi to a stern father and Thomson, the 59-year old first time manager, as the cool uncle who allowed players to be themselves.

“He still loves me and wants me to be careful and not make bad decisions, but he’s such a nicer person about it, and it felt like Girardi was just that staunch, very controlling, strict guy.”

Thomson isn’t the sole reason the Phillies are in the World Series. They do have two-time MVP and seven-time All-Star Bryce Harper in the middle of their lineup. The NLCS MVP brings a 1.351 postseason OPS into the World Series after hitting five homers in 11 games. He’s the guy the Astros can’t allow to beat them, especially with the struggling Nick Castellanos and Alec Bohm protecting him. That doesn't mean you walk him every time he comes up to bat, but there is a way you should pitch to him.

“Let your pitcher use his number one secondary pitch throughout the bat in complement with his fastball, instead of just ‘oh well, fell behind him, don't want to walk him,’ and now start feeding him fastballs through the rest of the at bat," the NL East coach said. "No, use your best secondary stuff throughout the rest of the bat and make him chase. If he doesn't, then you go to the next guys.”

This coach said the hitter in the Phillies lineup that caused him the most angst after Harper was Kyle Schwarber, but he added J.T. Realmuto and Jean Segura are two other guys not to take lightly.

A two-time All-Star with the Brewers and Mariners, Segura normally bats eighth in the Phillies lineup, and his ability to work the count can take a lot out of a starting pitcher.

“He’s a bad ball hitter, so that breaking ball away won’t work against him. You have to attack the top of the strike zone with fastballs.”

One of the Astros biggest advantages on paper going into the World Series is their defense. The Astros were second in outs above average and fifth in defensive runs saved in 2022, while the Phillies were 29th and 25th in those categories, but that’s one area where Philadelphia has improved significantly over the course of the season, and a lot it can be credited to the acquisition of Brandon Marsh from the Los Angeles Angels.

“Watching (Nick) Castellanos in center field, it was like, ‘wow, these guys are naked,’ but getting Marsh really made a difference and it put the rest of those guys in their right places, and (Alec) Bohm has really relaxed at third base.”

On the mound, the Astros pitching staff has gotten all the buzz in the lead up to this series, but the Phillies can get guys out too, especially Aaron Nola and Zach Wheeler at the top of the rotation.

“Those dudes stack up with the best. I honestly think their starting pitching is equally matched with Houston. Verlander’s Verlander, we know that, and Framber has the curveball and McCullers has the stuff and the experience, but Nola, Wheeler, and (Ranger) Suarez are really good.”

The Astros will take the field on Friday night as a heavy favorite to win their second World Series, but this coach believes it should be much closer than the oddsmakers say, and he can see the Phillies winning, but the Astros have a major advantage that could carry them.

“The only kicker for me is I think the Astros pitching is at a deeper point of doing than the Phillies are for this juncture of the season. I think there will be some more mistakes from the Phillies pitching just from the aspect of having not been to the World Series before, where the Astros are like, ‘This is what I do, I pitch in the postseason’, so I think if that factor rears its head and you see a human element with the Phillies pitchers getting caught up in the moment then the Stros are going to just roll.”