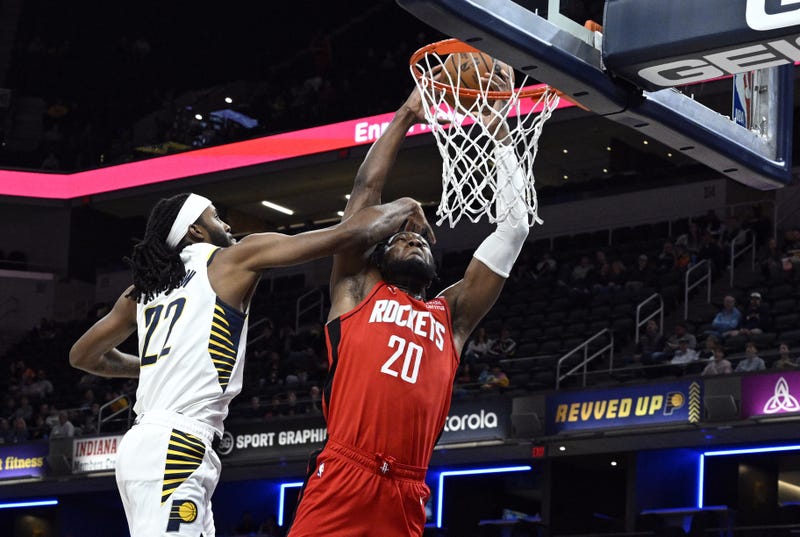 HOUSTON (SportsRadio 610)- On the sixth offensive possession of their game against the Hawks on Friday night Bruno Fernando set a screen for Jalen Green on the right wing, above the three-point line. Green took it left and Fernando rolled to the basket, catching a feed in stride from the Rockets guard, and threw it down for an emphatic one-handed dunk.

Fernando returned to action against Atlanta after missing 15 games with a left knee injury, and that one possession showed what the Rockets missed while he was out.

“(He) opens up a pick and roll game that's a little bit dynamic where we have a lob threat, but then there's also catch and shoot opportunities for the guys on the perimeter,” Rockets head coach Stephen Silas said.

Only four teams have run pick and roll more often than the Rockets this season, per NBA.com, but only three teams have been less productive on those plays. A big reason for that is their four most frequent roll-men, Alperen Sengun, Usman Garuba, Jabari Smith Jr, and K.J. Martin have been well below average as pick and roll finishers. Silas believes Fernando’s size and athleticism make him an optimal pick and roll partner.

“When you have that rim threat as opposed to short roll threat it makes it a little bit cleaner when you're going downhill in the pick and roll game,” he said.

“He’s our primary lob threat,” Rockets guard Kevin Porter Jr said. “Probably him and K.J., but he's a lot bigger than KJ, so they definitely respect him more rolling, but it helps me helps, it helps Jalen, helps (Eric Gordon). The primary creators just have an open floor and open space. They got to respect the lob, so there's a lot more easy layups out there.”

Fernando, 24, is in his fourth NBA season, making him a veteran among the rest of his teammates, and that gives him a better feel for how to best utilize his skills on the floor.

“He plays in a way that helps his teammates play well,” Silas said. “Whether it's screening or rolling or spacing and being in the right spot or getting out in transition, and those things carry over regardless of who you're with on the floor.”

Fernando played for the Hawks and Celtics before the Rockets acquired him last February. He was re-signed over the summer to a two-way deal before the team gave him a four-year, $10.9 million contract at the end of training camp.