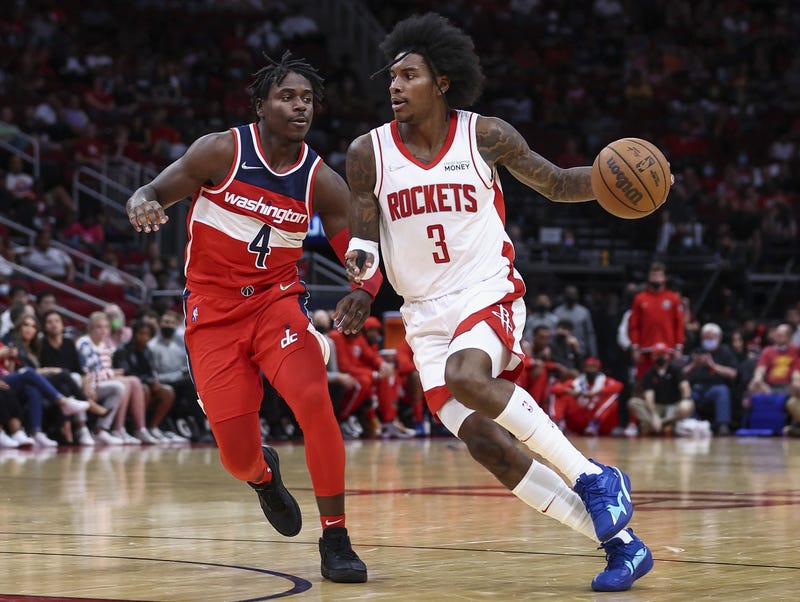 HOUSTON (SportsRadio 610)- More than four minutes into the Rockets first preseason game, Kevin Porter Jr had only taken one shot. He had the ball in his hands and the looks were there, but Porter had other ideas.

“He was passing them up so he could get a teammate involved,” Rockets head coach Stephen Silas said.

When the first quarter ended, Porter finished with five shot attempts in 10 minutes, but he also dished out four assists. Porter is officially the Rockets starting point guard and on Tuesday he played just like one.

“He was running plays,” Rockets guard Jalen Green said. “He was being point guard, taking on that point guard role, getting into the actions, and we just executed.”

With his teammates firmly involved in the action, the Rockets 21-year old point guard started to look for his shot his more. In the Rockets 125-119 win over the Washington Wizards, Porter finished with 25 points on 9-of-17 shooting. He also connected on half of his 10 three-point attempts, but Silas said what was most impressive about Porter’s night was his ability to know when to look to score and when to set his teammates up.

“Last year he’d have games where he’d score and then games where he would make plays for others, and tonight he had balance as far as that’s concerned. I wasn’t surprised by anything he did. He passed up some shots early, which, at first I was like ‘Don’t pass those shots up,’ but he was passing them up so he could get a teammate involved, so to do that shows some maturity from him, and some growth from probably last year.”

Porter says getting his teammates involved will be his focus at the start of games.

‘You don't know if you're gonna come out blazing, make five-of-five (shots), so my thing is just to get my guys going early because I know I can turn it on whenever.”

Turn it on he did. After a five-point first quarter, Porter scored seven in the second and then he added 13 more in the third.

“He had the hot hand,” Green said. “I knew when he was on that island and hit that step-back (in the second quarter) it was over.”

Porter is entering his third NBA campaign and first full season with the Rockets. He averaged 16.6 points in 26 games last season after being acquired in a trade from the Cleveland Cavaliers on January 22.