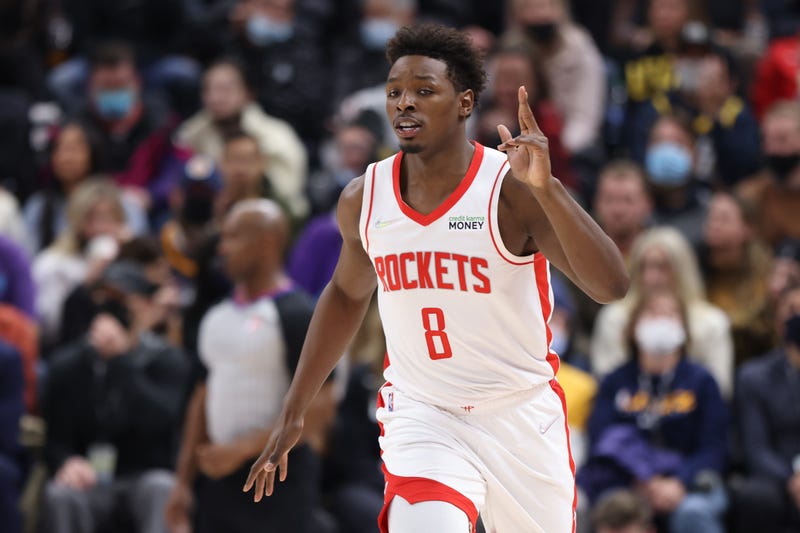 Bojan Bogdanovic drained a corner three off a Royce O’Neal offensive rebound, and after four straight empty possessions, a lead that had been as large as nine was down to two and the sellout crowd at Vivint Arena started to crescendo as the clock ticked below two minutes, but when the Rockets desperately needed a bucket, they got one, thanks to flawless execution that shows just how far they have come this season.

Eric Gordon and Christian Wood ran a pick and roll, which Utah blitzed with Bogdanovic and Royce O’Neale. Gordon was still able to find Wood rolling to the basket and as Rudy Gobert collapsed on him, the Rockets center found Jae’Sean Tate cutting down the baseline, who made a layup while being fouled by Bogdanovic. Tate made the free throw and the Rockets lead was back to five.

“It was a really good play by C-Wood,” Rockets head coach Stephen Silas after the Rockets beat the Jazz 116-111. “Eric came off the pick and roll, they blitzed it. He made the pocket pass to C-Wood, and he had it in the in the paint, and instead of forcing something he found JT on the baseline cut.”

Having played with Tate for a season and a half, Wood says the two have developed a chemistry.

“As soon as I caught it in a roll I knew he was going be on the left side and he's always cutting which is a big cut for us. I made the right pass, and he made the basket, it was the right play.”

Wednesday’s perfect execution showed how much the two have grown together.

“There's been a few times the last couple of years where I've cut and the ball went out of bounds or he thought I was spaced in the corner,” Tate said. “I think that today showed that we're starting to figure each other out.”

The Rockets have won three-of-four, all on the road, over a nine-day span, following a grueling 18 games in 32 days stretch. The team has been able to hold actual practices over the last week and now that the entire roster is out of the NBA’s Health and Safety Protocols the team can hold morning shootaround on gamedays. Silas thought the work put in on the practice floor translated to Wednesday’s win.

“We worked on some offensive execution that we ran down the stretch of the game and we did a pretty good job with our execution,” he said. “Then we worked on some of our switching yesterday, and it didn't show in the first half but it definitely showed in the second.”

Even with the success of the last week, the Rockets remain at the bottom of the standing in the Western Conference and their 14-32 record is third worst in the entire league, but Wood says the record is deceiving.

“We’re growing. It’s not as bad as people think it is. We just gotta keep it up.”

48 hours after winning on the road against a top four team in the West, the Rockets will look to do just that when they visit the team currently sitting second in the conference, the Golden State Warriors.