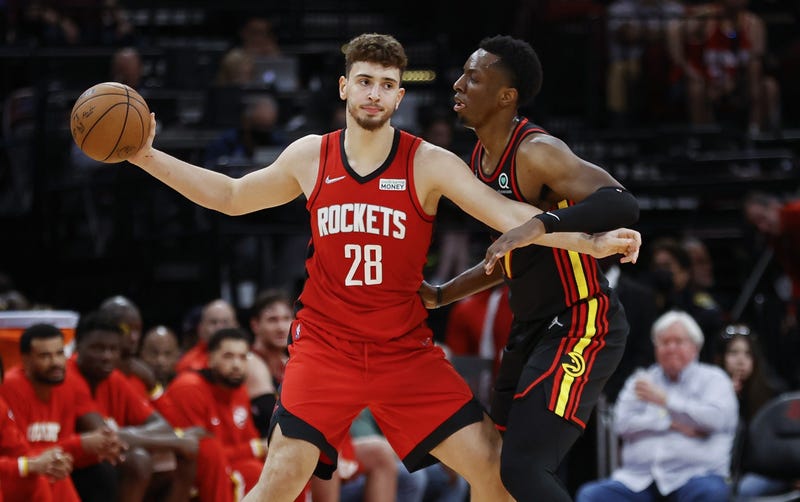 HOUSTON (SportsRadio 610)- Alperen Sengun is happy to be back with his Rockets teammates, but he enjoyed spending a month back in Turkey after being away for so long.

“I saw my family, and I missed them because seven months is a long time for me,” Sengun said Thursday. “I’m used to my food, my Turkish food, and I did everything, actually, and I had so much fun.”

Of all the skills Sengun worked on during his rookie season in the NBA his English might’ve developed the most. He joked that he didn’t forget any of his his second language while back home and although he had a translator standing to his right, Sengun answered every question during a six-minute media session in English.

“I did go to Turkey, but I was still talking with my friends here.”

Sengun has a busy summer ahead of him. He’ll spend the next two weeks working out at Toyota Center and will remain in Houston before before joining the Turkish National Team on June 20, where he hopes to play its two FIBA World Cup qualifiers on June 30 and July 3. He will return to the United States for summer league in Las Vegas, though he’s unlikely to play, and will travel back to Europe to take part in September’s EuroBaket tournament. The Rockets fully back his jam-packed schedule.

“Playing games is always great and meaningful games is even better,” Rockets head coach Stephen Silas said. “As far as being in shape and having timing at the beginning of season, he'll have it, so we're all for it and we're supporting him in that.”

Acquired in a draft day trade, Sengun, who won’t celebrate his 20th birthday until July 25, appeared in 72 games and averaged 9.6 points and 5.5 rebounds. He made major strides on both ends of the floor, and could be named to an All-Rookie team later this month, but he insists he accomplished very little.

“I didn’t do anything, but I just learned NBA basketball,” Sengun said. “After this season I will be better. Every year I will learn different things.”

The Rockets didn’t require Sengun to be in Houston for this part of the offseason, and it would’ve been understandable had elected to remain home considering the flight miles he will log the rest of the offseason, but the Rockets center believed it was important to be with his teammates.

"We're doing tough practices because we're working with John Lucas, you know, he's crazy, and he's crazy and his practice is crazy too, but I have to do this practice because I'm feeling better. I did practice in Turkey but not like this, just lifting and running. I’m watching NBA Playoff series and I missed the NBA, and right now I’m feeling good.”