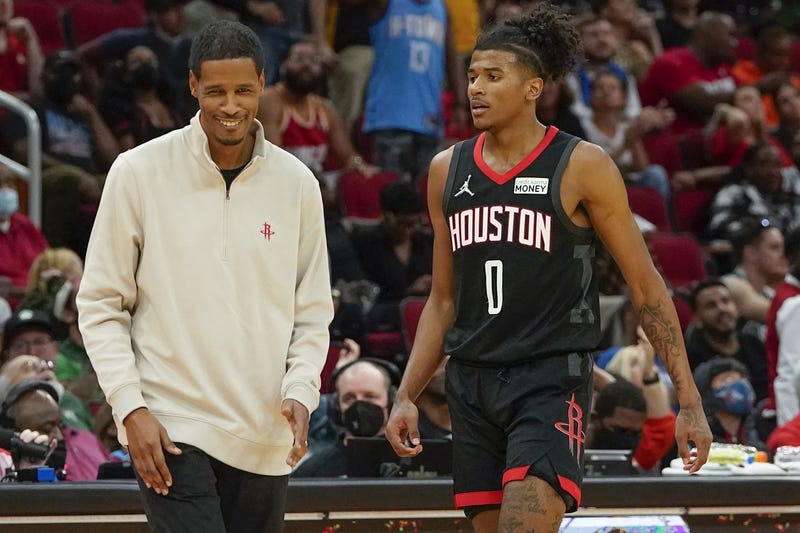 A year has passed since the Rockets traded James Harden, but for Stephen Silas, it doesn’t seem like it.

“That feels like a long, long time ago,” Silas said with a chuckle on Wednesday. “It was right at the beginning when I first got here, and there's been so much since then.”

When Rafael Stone dealt Harden to the Brooklyn Nets the Rockets went from a team competing for championships to team looking to compile as many ping pong balls as possible. Following Wednesday night’s win in San Antonio, the Rockets are 26-80 since trading their best player of the Toyota Center era.

“To have a calendar year go by and have two completely, starkly different seasons and directions and ways of doing things it's, as I think through it, it feels like it was ages ago.”

Despite the losing, Silas remains optimistic.

“We're moving in the right direction,” he said. “We have a bunch of young guys that we like a lot. We have flexibility, obviously, and Rafael has done a really good job of doing both of those at the same time.”

The Rockets spent their first round pick to draft Clint Capela in 2014. The next year, they selected Sam Dekker in the first round, using a pick acquired from the New Orleans Pelicans, but the next five drafts went by without the team adding a player in the first round. That changed last July when Stone drafted three players in the first round (Jalen Green, Usman Garuba, and Josh Christopher), before trading for a fourth (Alperen Sengun).

All four rookies were 19-years old when the season started, and Silas is starting a 21-year old converted wing, Kevin Porter Jr, at point guard. The Rockets are green, and it has shown on the floor.

“Were up and down,” Silas said. “We have good games, and we have games that aren't so good. We have distractions sometimes when we're on the floor. We are learning and we're we're growing.”

The Rockets are nowhere near the team that won 65 games and narrowly missed out on winning a championship four years ago, and only one player, Eric Gordon, remains from that squad, but there is foundation forming for what Silas and Stone hope could be the next great Rockets team.

Green has flashed the immense talent that made him worthy of the second pick of July’s draft. He’s improved considerably since the start of the season and his work ethic matches his vertical leap.

Sengun is a uniquely talented player who is well ahead of where the Rockets thought he was when he was drafted and has forced Silas to tweak his offense when he’s on the floor.

Christopher’s playing time was sparse early in the season, but after a quick G-League stop he took advantage of the opportunity afforded to him when Green and Porter went down with leg injuries and won a spot in Silas’ guard rotation much earlier than expected.

Porter is loved by Silas and the Rockets front office. His first three NBA seasons have been bumpy, but his talent is ability is undeniable and is recognized by stars around the league, including Harden.

Stone found Jae’Sean Tate, a 26-year old, who played four years at Ohio State, after he bounced around Belgium and Australia. He’s been a model of consistency the last two seasons and keeps adding to his game.

The Rockets currently own two first round picks in this year’s draft, with their own pick likely to fall within the top five. They currently have two first round picks in the 2023 draft as well, so that explains why Silas remains optimistic despite sitting at the bottom of the Western Conference with a 12-31 record one year after the Harden trade.

“I love our direction. I love where we're going and what we're going to be, it's just the growing pains sometimes can be pretty tough.”