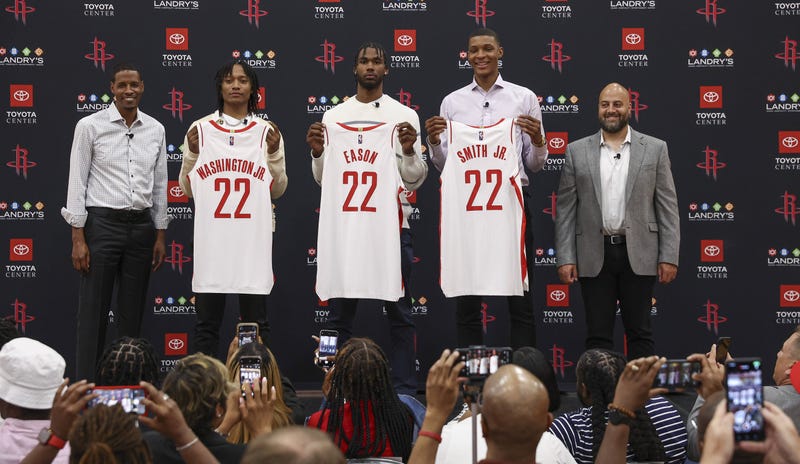 HOUSTON (SportsRadio 610)- As the Rockets met with the media before leaving for Lake Charles to start training camp on Tuesday, they did so without stating any lofty goals or declaring the 2022-23 season a championship or bust campaign. Instead, the Rockets will start the season with one goal in mind.

“We're gonna be the team that people hate to play against,” Rockets forward Jae’Sean Tate said. “You know you're gonna have to bring your track shoes, and we're gonna play hard.”

With two years of NBA experience, the 26-year old Tate is one of the old guys on this Rockets team, but it the youth the team is counting as why they’ll be tough to play.

“You get tired we got a whole other team of young guys with fresh legs ready to do the same exact thing and I think that can be dangerous.”

The Rockets added three first round picks to a team that won just 20 games a season ago, and only 6-of-20 players on the team’s training camp roster have more than three years of NBA experience. Half of the Rockets roster was born in the 2000s. Only Eric Gordon and Boban Marjanović were around during the 1980s.

“The guys fly all around,” Marjanović, the newest Rocket, said. “They’re jumping from the floor to the roof. I was like, okay. They are really cool, they're really good, I'm super excited.”

Despite the assembled talent, the Rockets remain in the early stages of a complete roster overhaul, and to its credit, the team is realistic about the upcoming season, but that doesn’t mean there isn’t extreme optimism about the future.

“Maybe not this season, maybe next season, but we’re believing we’re gonna be the best team in this league,” Rockets center Alperen Sengun said. “I believe this, and I think my teammates believe this too. We have to learn a lot of things first.”

Sengun is expected to start for the Rockets this season after an impressive rookie year. He’ll be joined in the starting lineup by Jalen Green, the second overall pick of the 2021 draft who was a first team all-rookie selection in 2022, as well as Jabari Smith Jr, the third overall pick of June’s draft. Adding talent and experience won’t make the Rockets contenders overnight, but the hope is for progress that can carry over.

“Man, we knew that we were gonna have to bring it because your kids don't stop,” he relayed. “That's my thing, it's not gonna be an easy night coming in here playing against the Rockets.”

His team might not win many of their 82 games this season, but Silas’ goal is to hear the same compliment of his group.