HOUSTON (SportsRadio 610) -- If anyone should know what to expect when a football is thrown in DeAndre Hopkins’ vicinity, it’s Deshaun Watson.

The pair played together in Houston for three seasons before Hopkins was traded abruptly to the Arizona Cardinals for running back David Johnson, a second-round pick and a fourth-round swap over the offseason.

Hopkins and Watson formed a dynamic duo in their three seasons together with the Texans, and both have followed up with outstanding seasons apart from each other, the most glaring difference being the Cardinals’ team success (atop the AFC West at 6-3) and the Texans’ team failure (2-7).

Watson was on the flight back from Cleveland to Houston, after the Texans fell to the Browns 10-7 in a hard fought game, when he saw Hopkins catch the Hail Mary from Kyler Murray to beat the Buffalo Bills.

“I mean, that’s just Hop. No surprise,” Watson said. “That’s a guy that does that on the daily basis. That’s what he’s known for, being legendary in legendary moments. He made a great play for them and he got them the W.” 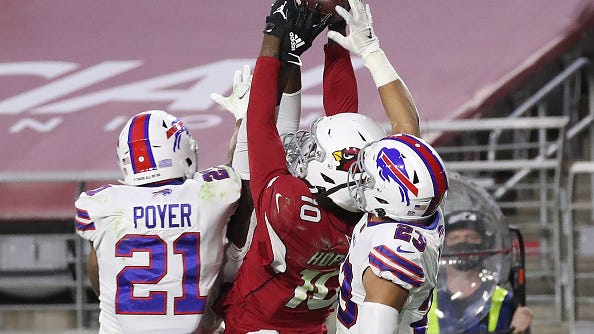