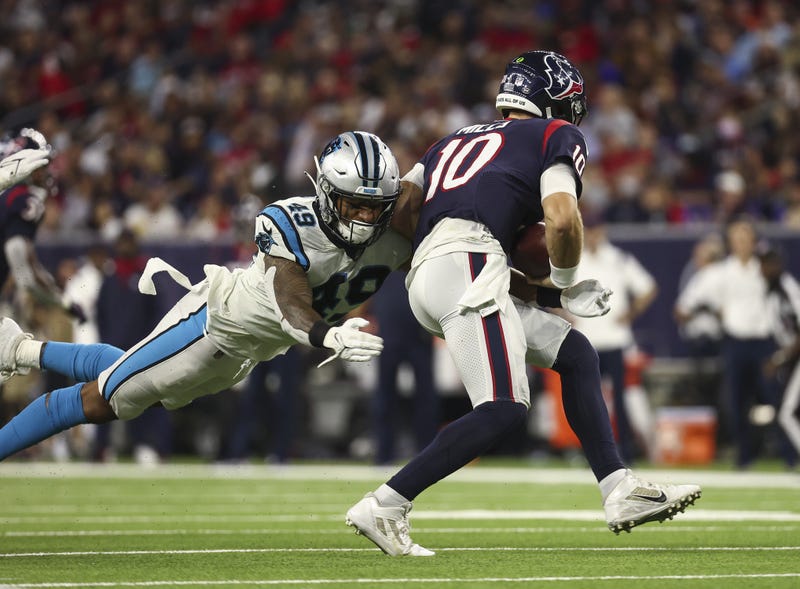 HOUSTON (SportsRadio 610)- None of the numbers Davis Mills put up in his first NFL start will jump out at you. He threw for 168 yards and a touchdown during the Texans 24-9 loss to the Carolina Panthers at NRG Stadium on Thursday, but that doesn’t mean he didn’t impress the team that beat him.

“He's a tough guy,” Panthers linebacker Haason Reddick said. “He escaped my grip a couple times today and it was shocking to see.”

Mills took nine hits from Panthers defenders on 32 drop backs and he was sacked four times. Reddick was responsible for three of those hits and 1.5 sacks.

“Even with the one hit, just the way he got back up, the guy, he's just tough. He's mentally and physically tough."

Reddick and the Panthers defense forced the Texans to punt on their first four possessions of the game, but right before halftime, Mills led a seven-play, 64-yard drive that ended with a touchdown pass to Anthony Miller from a yard out to put the Texans on the board.

Mills completed 4-of-5 passes for 61 yards on the drive, with the lone incompletion coming on a spike to stop the clock. That forced an adjustment from Carolina’s defense, and the Texans managed just a field goal in the second half. Still, Mills’ play drew raves from Panthers head coach Matt Rhule.

“I thought Davis Mills did a really nice,” Rhule said. “If we didn’t play man or bring pressure, he was finding guys that were open, and that’s why he was drafted highly.”

Carolina blitzed Mills on 13-of-32 drop backs on Thursday and forced pressure on seven of those plays. A lot of quarterbacks, especially rookie quarterbacks would’ve folded in that scenario. Mills didn’t.

“He got right back up off the ground and continued to play,” Reddick said. “In Davis Mills they definitely have a tough player."