(SportsRadio 610) - Davis Mills and the Texans offense have struggled out of the gate to begin the season as many thought they might.

Yet, with a veteran offensive line and rookie first-round draft pick left guard Kenyon Green emerging as a legitimate force, Davis Mills has had adequate time to find receivers and throw the ball.

He’s taken six sacks this season so far, three in each game. Some of those Mills just flat out held the ball too long as he continues to struggle maneuvering inside the pocket.

"Obviously there’s some situations where I can help out the offensive line a little bit," Mills said. "Stepping up in the pocket, I think our guys on the edge especially left and right tackle are giving me a really good pocket, so I’ve got to help them out a little bit, step up and take a little bit of pressure off those guys."

Mills is completing just 56% of his passes this season, a number deflated in large part due to the forgettable performance in Denver in which only 50% of his passes found the hands of Texan receivers. The offense sputtered most of the day, tallying just nine points on 234 total yards.

The Texans missed a number of opportunities to extend drives, converting just two third downs in 13 tries, as Mills struggled routinely to make basic throws in the short to intermediate passing game.

"Just keep straining, try to make plays. We do it out here in practice, we did it all camp, throughout preseason, just got to execute once we get in the games," Mills said. "It starts with me. I’ve got to make all the throws and I haven’t done that. Just got to keep pushing for what we’ve been training for and I think we’re ready to perform. We’ve just got to do it."

The clock just started ticking on Mills, as he’ll be making just the 14th start of his young NFL career this Sunday when his team visits the Bears.

However, 14 starts is just as many total games he played during his entire college career at Stanford. A quarterback's lifespan in the NFL isn’t very long when you don’t move the chains.

As frustrating as things have been for Mills and the offense, for consecutive weeks they’ve been in late game situations with the opportunity to tie or win a game.

While Mills hasn’t played in many of those types of games, even in college, he said he doesn’t feel like the moment is too big for him.

"I’m comfortable in those situations. I’ve just got to execute my job,” Mills said. "Looking back on it, there’s opportunities down the field, we’ve got to execute with those, I missed a couple throws this last game (Denver) that if they cover up, like I said before, we’ve got to get our check downs the ball and let them make plays and move the ball that way."

I asked Davis Mills about what the game feels like to him in crunch time #Texans pic.twitter.com/W5rCEmk32L

Those check downs haven’t been enough to consistently move the chains.

Mills’ yards per attempt this season are just 5.6, which is second worst in the league.

A team that doesn’t know how to win yet has another opportunity ahead of them this weekend. 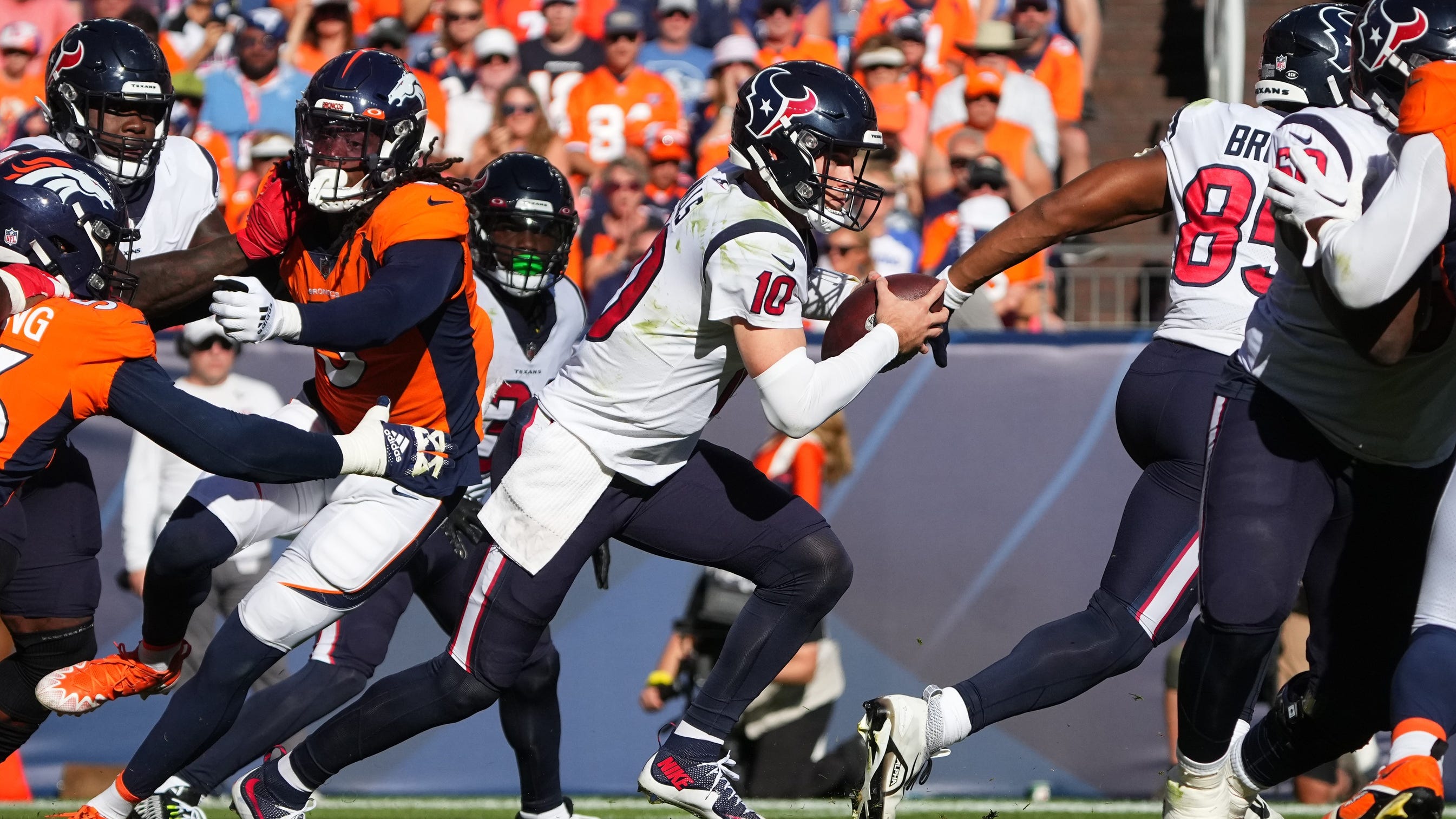 Bijani: Good teams win those games, Texans not there yet

The Texans will face a Bears defense that ranks last against the run, yielding the most yards in the league through two games with 379 yards on five yards per carry.

The Texans could be licking their chops as rookie Dameon Pierce has seen an increase in usage as both a rusher and pass catcher out of the backfield.

Mills knows he has to do the fundamental things better to get himself and the offense going in the right direction.

The question is, will he do it?

With plenty to turn around, Mills will have to find a way to do it on the road, where he has struggled mightily as a starter. He has just a 63.1 passer rating, including a 4/9 touchdown to interception ratio on the road.

Davis Mills on differences he experiences in playing on the road instead of home #Texans pic.twitter.com/IqIq0mDLHf

He and the Texans face a Bears defense Sunday that head coach Lovie Smith called “second cousins” to what the Texans do.

Also, quite similarly to the Texans, the Bears are entrusting a secondary to a couple of rookies, including safety Jaquan Brisker and nickel corner Kyler Gordon.

"A lot of scheme similar to what we have on defense and it’s similar to some of our strong corners," Mills said. "They’re going to be ready to fill in the run game and also have really good coverage opportunities but I think we like our guys on our side of the ball and we’re ready to play against anybody."