If there's one day of the football season in which fans should behave with a little more affection for their fellow fans, Thanksgiving is a pretty strong candidate. But apparently, fan fights can occur on even the days in which we are most caring and appreciative of others.

That was proven on Thanksgiving's Raiders-Cowboys game at AT&T Stadium in Dallas, when a big fight broke out at the concessions stand. Tempers may have been high all around after the Cowboys got down early thanks to DeSean Jackson's long touchdown, with tempers flaring both on and off the field.

A couple chicks throwin it down at the cowboys game tonight pic.twitter.com/TkMoxWu7ap

Fists and hair flew all over the place in a chaotic scene as surrounding attendees watching in shock. We're not sure what the impetus of the brawl was, but it couldn't have been good considering how quickly things seemed to escalate.

There haven't been too many constants around the NFL this season, with star player performances intertwining with let-down games and the injury/COVID absences continuing to pile up. Unfortunately, one constant that has been there are the fan fights, breaking out all over the place and caring not what fan base they involve. 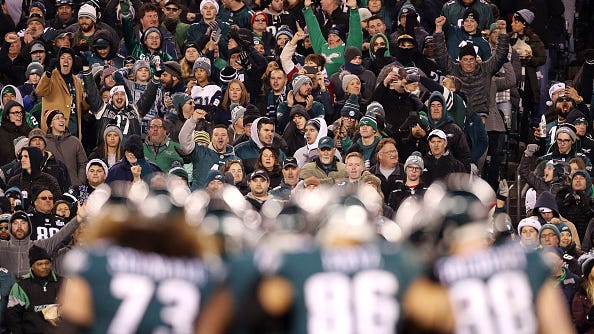 WATCH: Fight breaks out between Eagles and Chiefs fan at Lincoln Financial Field

In fact, fan fights have become such a frequent occurrence that USBets polled fans to determine which fan bases would be most likely to start a fight — and the Eagles, Raiders, Steelers, Patriots and Cowboys can be "thankful" that they all made the top five.