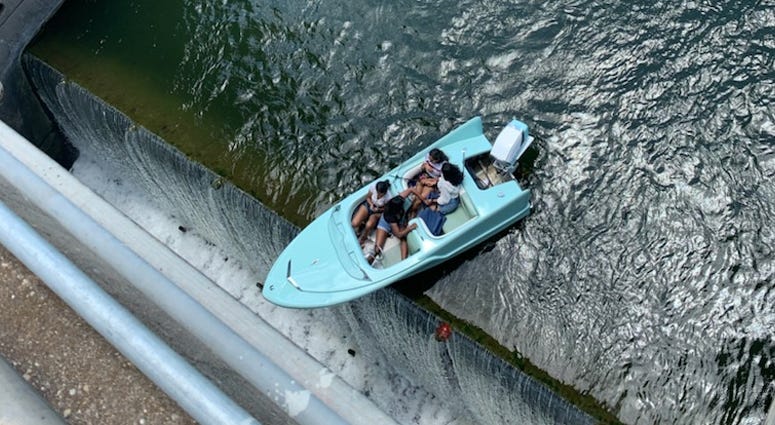 AUSTIN (Talk1370.com) -- Four boaters are safe after emergency crews worked to keep them from going over Longhorn Dam Thursday afternoon.

First responders were called to the scene near Pleasant Valley Road just after 2:30 p.m. Thursday. 911 callers reported a boat with people on board about to go over the dam.

At one point, the bow of the boat was floating over the top of the dam. ATCEMS and STAR Flight worked to lower life vests to the four occupants of the boat.

Eventually, crews were able to tow the boat back to open water and pull all four occupants to safety.

FINAL water rescue 1-79 N PLEASANT VALLEY RD: Boat & occupants have been pulled off the dam & in to open water by the @Austin_Police lake patrol boat. No occupants are requesting #ATCEMS. No further updates planned unless conditions change. No further information is available.

According to ATCEMS, no injuries were reported.

music
Travis Scott is suddenly Willy Wonka, hiding Astroworld tickets on cans of CACTI
music
Join us for an Audacy Check In with the Goo Goo Dolls
music
Watch our Audacy Pride Party with Tate McRae
news
More women are looking to have a 'hot girl summer,' more men are ready to settle down: Survey
music
Watch our Audacy Pride Party with girl in red
sports
MLB unveils All-Star jerseys to be worn in-game and pretty much everyone hates it