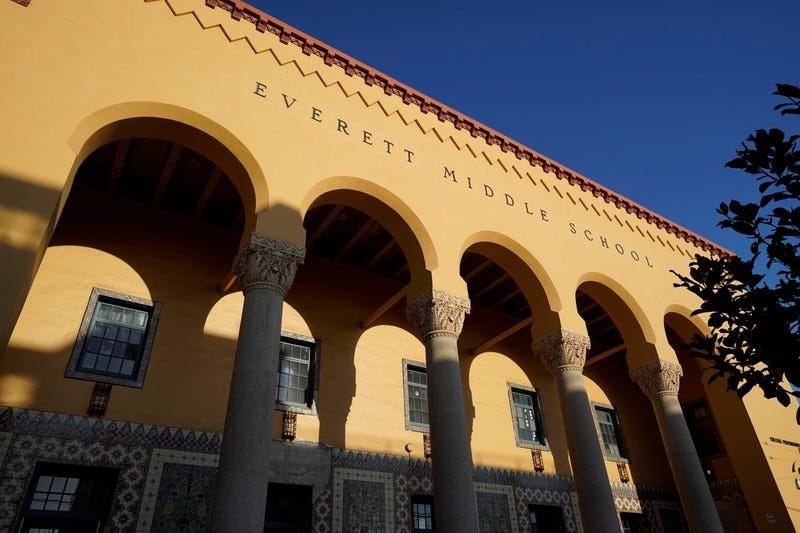 SAN FRANCISCO (AP) — The first week of school was supposed to mark a triumphant return to classrooms at San Francisco’s Everett Middle School after more than a year of distance learning.

But as computer science teacher Yesi Castro-Mitchell welcomed a class of sixth graders last fall, a student started punching her, again and again.

Castro-Mitchell wrapped her arms around her head and hoped for the blows to stop. She remembers the stunned silence in her classroom as other students witnessed the assault. The teacher suffered a concussion, a dislocated jaw, chipped teeth and hearing loss in her left ear that now requires a hearing aid.

Across America, one of the nation’s most difficult academic years was also one of the most violent. Experts who track school behavior nationwide said fights and other aggressive behavior, including shootings, appear to have increased. Now, with students heading out on summer break, schools are taking stock of what went wrong and how to fix it.

At Everett, many of this year’s problems were no different than before the pandemic, but “they were absolutely greater in severity, intensity and frequency,” said Cris Garza, a teacher at Everett for eight years and the teachers’ union representative.

In addition to the attack on the teacher, fights broke out almost daily among students, according to several teachers and parents. One brawl left a student hospitalized for at least two days. In other incidents, packs of students would barge into classrooms, disrupting lessons and sometimes destroying school property.

Educators and psychologists say the pandemic contributed to the volatility in schools by causing a surge in student mental health problems, trauma at home, a lack of socializing opportunities, and a shortage of teachers and counselors that reduced adult supervision and guidance.

There is no national data that tracks school fights and assaults, but education officials across the country say violence erupted more often and more fiercely.

“Without doubt, we are hearing across the board that schools are experiencing significantly more crises related to school violence and emotional behavioral crises,” said Sharon Hoover, co-director of the National Center for School Mental Health at the University of Maryland School of Medicine.

The same issues are likely to resurface in the fall, she said, if struggling adolescents don’t get the help and structure they need.

Students at Everett felt the pandemic’s effects acutely. About 70% of the school’s 600 students are Latino, many are English learners and most are economically disadvantaged. Many lost parents or grandparents to COVID-19 or lost their homes because families couldn’t pay rent, said school social worker Bridget Early.

Castro-Mitchell said nobody warned her that her attacker had a history of behavioral problems. After the assault, the teacher transferred to another school but left before the end of the year as she struggled with PTSD.

Several Everett staff members complained that a pandemic rule intended to improve air circulation had the unintended effect of inviting misbehavior. Teachers were not allowed to close and lock classroom doors, and groups of students who skipped class would roam the halls and burst into other classes in session.

Reports from members of the National Association of School Resource Officers suggest there were more weapons on school campuses, more assaults and more fist fights across the country, said Mo Canady, the group’s executive director.

The Clark County School District in Las Vegas, one of the country’s largest, has said it will provide teachers with panic buttons after an increase in violence, including an April attack on a teacher that left her unconscious in her classroom. The district’s police chief, Mike Blackeye, said the 2021-22 school year was the busiest in his department’s 40-year history.

Hoover said when the pandemic hit, young people in particular lost what gave their lives structure: They were cut off from going to school and isolated from peers.

Many schools have tried to address the underlying causes.

When students returned to Savanna High School in Anaheim, California, it was “fight after fight after fight,” said Penny Hatzis, the school’s lead counselor. The school hired a specialist in restorative justice, which emphasizes mediation over punishment, although they are looking for more balance with discipline next year. In October, they used grant money to open a “relaxation room,” where students could talk to a mental health counselor.

“We got it open, and we saw a humongous decline in fights and discipline issues. It was night and day,” Hatzis said. The school also held support groups for students who suffered loss, LGBTQ+ students and others — sometimes several in one day.

A freshman at Savanna, Clara Oliver, struggled with anxiety that intensified when she returned to in-person school and found it difficult to carry out face-to-face conversations with classmates. For her, the relaxation room became a refuge. Eventually talking to people became easier.

“The room would give us a break from everything,” she said. “When we were stressed out about school, we would just go to that room. There was someone to talk to, there were snacks, there were fidget toys and card games. We could relax, then go back to class and continue our day.”

But they couldn’t pull it off. As elsewhere, the omicron-led surge of the coronavirus sidelined educators, deepening a staffing crisis at the school where there was already a shortage of security guards and substitutes.

“In a year where mental health was more important than ever,” Early said, she spent most of her time “putting out fires.” She frequently served as a substitute.

Parents worried about their children’s safety and encouraged them to steer clear of danger zones.

“My son did not usually use the bathrooms. He would wait until school was over,” said Dheyanira Calahorrano, mother of a seventh grader who had no science teacher, no music teacher and no gym teacher for several months.

Principal Esther Fensel resigned at the end of the school year and did not respond to interview requests.

A spokesperson for the San Francisco Unified School District, Laura Dudnick, said Everett, like many other schools, struggled with the rise of student mental health challenges and staffing shortages.

During the year, she said the district hired an additional security guard, increased substitute coverage and required students to lock up cellphones during class.

Next year, Early said, the school will open a grant-funded wellness center with an on-site therapist and other staff to focus on students’ social and emotional needs.

“What all kids need, especially kids who experience trauma, is consistency and stability," Early said. "We could not provide that for them the whole year.”

The Associated Press education team receives support from the Carnegie Corporation of New York. The AP is solely responsible for all content.