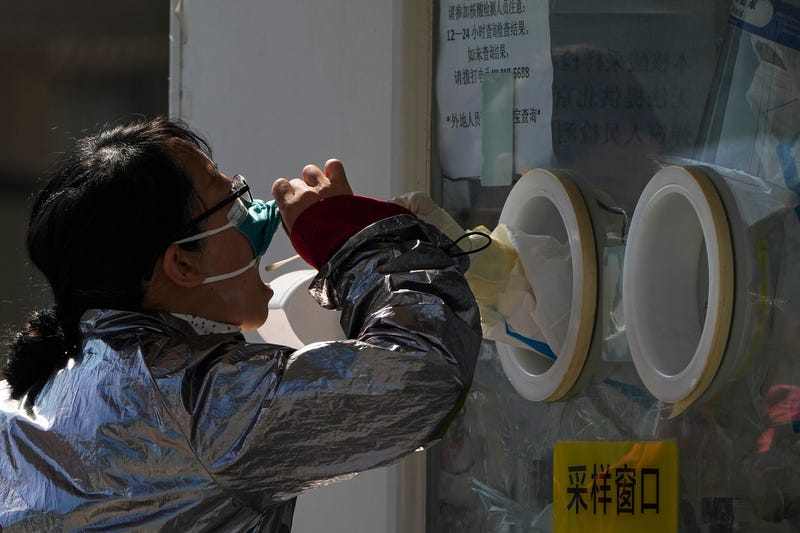 BEIJING (AP) — The sprawling Xinjiang region in western China has been hit with sweeping COVID-19 travel restrictions as the government ratchets up control measures across the country ahead of a key Communist Party congress later this month.

Trains and buses in and out of the region of 22 million people have been suspended, and passenger numbers on flights have been reduced to 75% of capacity in recent days, according to Chinese media reports.

A notice from the regional government on Tuesday said the measures were enacted to “strictly prevent the risk of spillover" of the virus. A Xinjiang official apologized for the spread of the epidemic to other regions and provinces in China, particularly in recent days.

As is often the case with China’s draconian “zero-COVID” policy, the measures seemed out of proportion to the number of cases detected. The National Health Commission announced Thursday that 97 cases had been recorded in Xinjiang in the latest 24-hour period, after 91 cases were reported the previous day. All of them were asymptomatic.

Officials are desperate not to be called out for new outbreaks in their regions and Xinjiang has been under special scrutiny over the government's establishment of a series of prison-like re-education centers in which Muslim minorities have been taught to renounce their religion and allegedly subjected to a range of human rights abuses.

“Zero-COVID" has been closely identified with Communist Party leader Xi Jinping, who is expected to receive a third five-year term in office at the congress beginning Oct. 16. That's despite criticisms from the World Health Organization and massive disruptions to the economy, education and normal life in China.

Last month, a nighttime bus crash that killed 27 people who were being forcefully moved to a mass quarantine location in southwestern China set off a storm of anger online over the harshness of the policy. Survivors said they had been compelled to leave their apartments even when not a single case had been discovered.

“Zero-COVID” has been celebrated by the country's leaders as evidence of the superiority of their system over the U.S., which has had more than a million COVID-19 deaths.

Xi has cited China’s approach as a “major strategic success” and evidence of the “significant advantages” of its political system over Western liberal democracies.

Yet even as other countries open up, the humanitarian costs to China’s pandemic approach have grown. With national and some provincial borders closed, tourism has all but dried up and the economy is forecast by the World Bank to grow by an anemic 2.8% this year. Xinjiang has been hit especially hard because of sanctions brought against some of its officials and products over human rights concerns.

Even without nationally identified criteria, testing and lockdowns have become the norm for tens of millions of people in China from the North Korean border to the South China Sea, as local officials desperately seek to avoid punishment and criticism.

Earlier this year in Shanghai, desperate residents complained of being unable to get medicines or even groceries during a two-month lockdown, while some died in hospitals from lack of medical care as the city restricted movement. All 26 million city residents in China’s largest city and financial hub have been ordered to undergo two additional days of testing this week, despite the announcement of just 11 new cases Thursday, none of which showed symptoms.

The number of daily cases announced on Wednesday for Xinjiang has been corrected to 91, not 93.