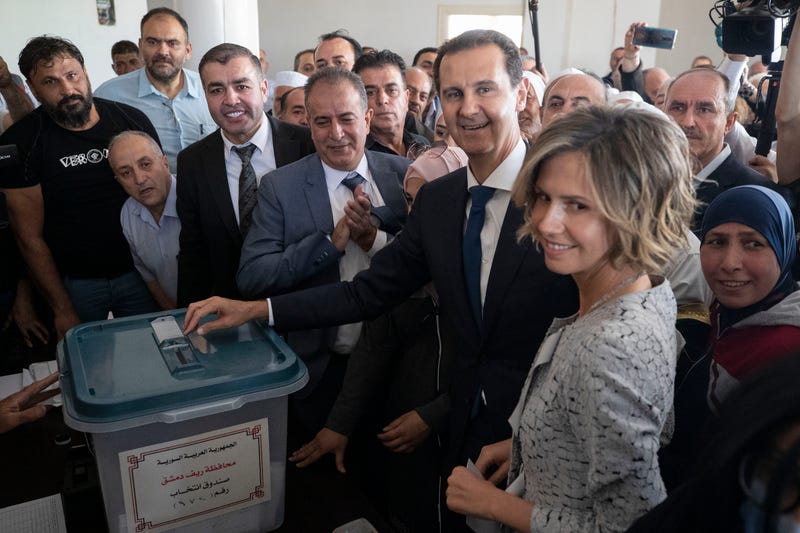 DAMASCUS, Syria (AP) — Syrians in government-held areas of the war-torn country headed to polling stations early Wednesday to vote in a presidential election guaranteed to give President Bashar Assad a fourth seven-year term.

The vote is the second presidential election since the country's conflict began 10 years ago and has been dismissed as a sham by the opposition and Western countries, including the United States. The post has been held by members of the Assad family for five decades.

“The Assad regime’s so-called presidential election is neither free nor fair,” U.S. Secretary of State Anthony Blinken said in a Twitter post Wednesday. “The U.S. joins France, Germany, Italy, and the UK in calling for the rejection of the regime’s attempts to regain legitimacy without respecting the Syrian people’s human rights and freedoms.”

Assad blasted countries that have dismissed the vote as illegitimate, saying most of those nations “have colonial history” and “we as a state are not concerned about such statements.”

He spoke Wednesday morning after casting his ballot in the Damascus suburb of Douma. The area was one of the main rebel strongholds in the country until it was retaken by government forces in 2018. It was the scene of an alleged poison gas attack in April 2018 that triggered strikes by the U.S., Britain and France.

“The vote that we are performing today would not have happened had it not been for the thousands of martyrs that fell while defending the land and people,” Assad said.

The 55-year-old Assad arrived at the polling station with his wife, Asma, driving his own car.

Assad has been in power since 2000, when he took over from his father Hafez, who ruled before that for 30 years. Despite the war, which seemed at one point to threaten his rule, Assad remained in power supported by regional powerhouse Iran and Russia, which sent in military advisers and air power to push back the armed opposition.

Two other candidates are running for the country's top post, which has been held by members of the Assad family for five decades.

They are little known figures, Abdullah Salloum Abdullah and Mahmoud Ahmad Marie. But competition with Assad is largely seen as symbolic in a country where elections are .

Starting at 7 a.m., thousands began arriving at polling stations in Damascus, thronging streets festooned with giant posters of Assad and banners praising his rule. Most were not wearing masks, despite a coronavirus outbreak in the country.

“We choose the future. We choose Bashar Assad,” read one of thousands of banners raised in the capital Damascus.

“I am here to vote because it is a national duty to choose a president who will lead us in the coming period,” said civil servant Muhannad Helou, 38, who said he voted for Assad.

No vote will be held in northeast Syria, which is controlled by U.S.-backed Kurdish-led fighters, or in the northwestern province of Idlib that is the last major rebel stronghold in the country.

Still, in some parts of government-held areas, including the southern provinces of Daraa and Sweida, many have rejected the vote calling it “illegitimate.”

The Syrian Democratic Council that runs daily affairs in northeast Syria said in a statement it will not take part in the vote “before political solutions in accordance with U.N. Security Council resolutions, release of detainees, return of displaced and putting the basis for a political structure far away from tyranny.”

“Syria’s presidential election is not expected to be free, fair, or legitimate,” said Edward Denhert, Middle Eastern research analyst at The Economist Intelligence Unit. In a note, he said the sham election will stir renewed condemnation from the U.S. and some EU nations, deepening the rift between Syria and the West.

“Consequently, Mr Assad’s regime will be forced to pivot further towards its Russian and Iranian backers, and increasingly towards China,” Denhert said.

The vote this year comes as Syria’s economy is in free fall as a result of a decade of war, Western sanctions, government corruption and the financial crisis in Lebanon, Syria’s main link with the outside world.

The Biden administration has said it will not recognize the result of the Syrian election unless the voting is free, fair, supervised by the United Nation and represents all of Syrian society.

"We are not involved in these elections ... in any way, and we, of course, have no mandate to be," U.N. secretary-general's spokesman Stephane Dujarric told reporters at the United Nations on Tuesday.

Syria’s Interior Minister Mohammad Rahmoun said 12,102 polling stations were set up in all the Syrian governorates. He said there are more than 18 million eligible voters in Syria and abroad. Syrians living abroad voted last week.

Syria had a population of 23 million before the conflict broke out a decade ago. The fighting has left nearly half a million dead and half the country’s population displaced, more than 5 million of them refugees outside Syria.

The civil war broke out in 2011 when Arab Spring-inspired protests against Assad family rule turned into an armed insurgency in response to a brutal military crackdown.