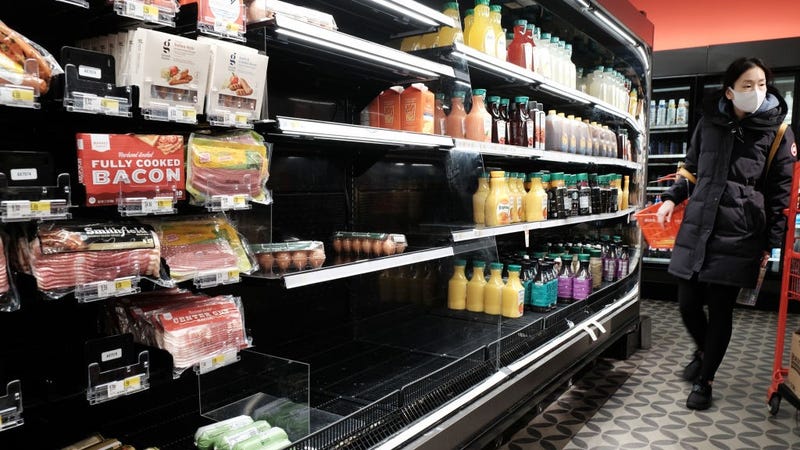 NEW YORK CITY - JANUARY 12: People shop for groceries in a Manhattan store on January 12, 2022 in New York City. Newly released data shows that inflation grew at its fastest 12-month pace in nearly 40 years during the month of December. It showed a 7% jump from a year earlier, as prices rose on everything from gas to furniture for American shoppers. Photo credit Spencer Platt/Getty Images
By Colin Martin, Audacy

Kansas City, MO – Inflation hit its highest mark in nearly 40 years in December, increasing 7% from a year earlier, the Bureau of Labor Statistics said on Wednesday.

The Consumer Price Index for December 2021 showed that all items index increased 7% before seasonal adjustment. The core inflation, which does not include volatile food and gas prices, rose 5.5% from a year ago.

Used car and truck prices saw the biggest jump, increasing 37% in the last year. The average used vehicle costs about $29,000, according to Edmunds.

Shelter costs also contributed to the record rise, going up 4.1% over the last year.

On the other hand, energy prices dropped in December by 0.4%, reflecting the falling prices for gasoline and natural gas. Overall, energy prices rose 29.3% over the last year with gasoline (all types) increasing 49.6%.

Supply chain issues and high consumer demand have caused prices for used cars and houses to increase. The last time prices were this high was during the summer of 1982.

“We have to take a step back,” Daryl Fairweather, chief economist at Redfin, said. “We had extremely low inflation this time last year, so it’s not the end of the world that inflation is 7 percent. It would be very concerning if, next year, it was still seven percent. But we’re going to see some high inflation until the virus is not interrupting supply chains and not causing people to change their spending habits.”

The COVID-19 pandemic has continued to affect people's spending habits. For example, the food at home index rose 6.5% over the last 12 months, comparing to a 1.5% annual increase over the last 10 years. Grocery store food group indexes increased as well, with meats, poultry, fish, and eggs going up 12.5% over the last year, despite a drop in December.

The index for food away from home rose 6% in the past year, the largest increase since January of 1982.

"Today’s report—which shows a meaningful reduction in headline inflation over last month, with gas prices and food prices falling—demonstrates that we are making progress in slowing the rate of price increases," Biden said.

"At the same time, this report underscores that we still have more work to do, with price increases still too high and squeezing family budgets."