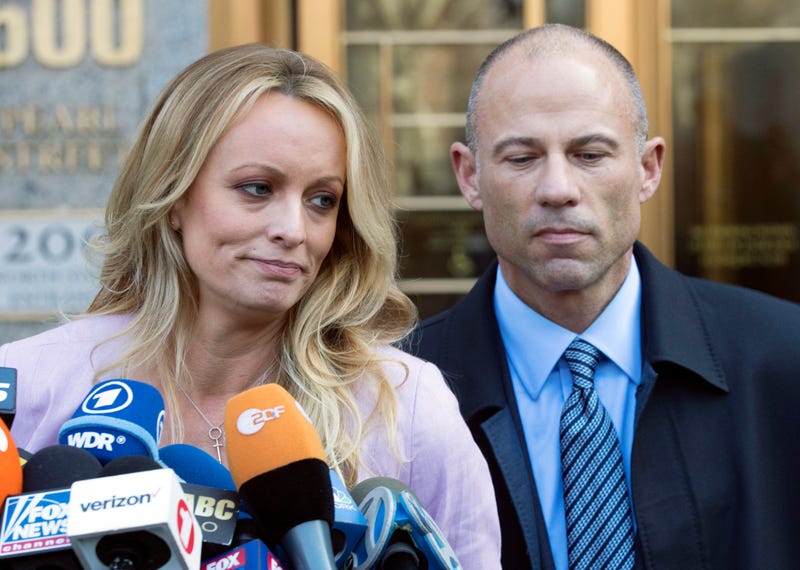 Jury selection hit full stride a week after written questionnaires were filled out as U.S. District Judge Jesse M. Furman introduced over 60 prospective jurors to Avenatti and the lawyers on both sides who will present evidence during a trial projected to last up to a month.

He asked Avenatti and the lawyers to briefly take off their COVID-19 masks so prospective jurors could see their faces and make sure they don't know them from their private lives.

Some jurors were in a courthouse assembly room while others watched the judge by video in a ceremonial courtroom. Everyone was spaced apart to prevent the spread of the coronavirus.

Among 49 questions presented to possible jurors was one in which they were asked if they could be fair even after hearing evidence that Daniels once worked in the "pornography profession."

The prospective jurors made it to the Manhattan courthouse despite a morning storm. Late in the day, the judge instructed about 40 of them to return on Friday for the final step in the jury selection process, when lawyers on both sides can eliminate some individuals from a jury of 12 people without providing a reason.

Once chosen, the jurors will hear opening statements on Monday before they hear and see evidence to help them decide whether Avenatti cheated Daniels out of hundreds of thousands of dollars owed to Daniels from a book deal.

Lawyers for Avenatti, 50, have said he is likely to testify in the case. He has pleaded not guilty to wire fraud and aggravated identity theft charges.

Avenatti became well known in 2018 when he represented Daniels in lawsuits against Trump. He was treated so well in some circles that he considered running for president himself before federal prosecutors in New York and Los Angeles announced criminal charges against him in separate cases.

In early 2020, Avenatti was convicted by a jury of trying to extort up to $25 million from Nike and was sentenced to 2 1/2 years in prison, though he has not yet begun serving that sentence.

Besides the trial over book proceeds, Avenatti also faces a retrial in California on federal charges alleging that he stole millions of dollars in settlement money from his clients. His first trial ended in a mistrial in August.