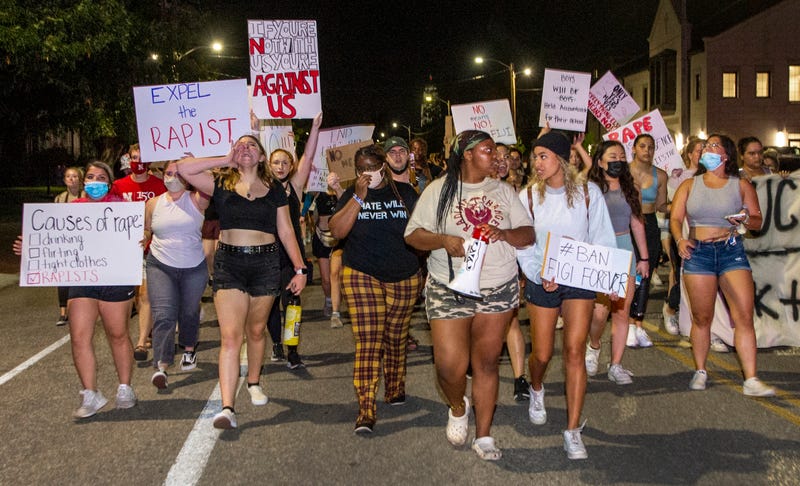 TOPEKA, Kan. (AP) — Reported sexual assaults have sparked large protests on college campuses in at least seven states just weeks into the new school year, which advocates say reflects both a greater vulnerability among students who spent last school year learning remotelyand a greater ability among young people to make themselves heard on the issue.

Such protests aren't new, but there seems to have been an unusually large number already this semester, with demonstrations over the past month at schools in Nebraska, Iowa, Kansas, Alabama, Michigan, Massachusetts and Missouri. Protesters have accused their schools of doing too little to protect students and being too lenient with on the accused.

Those pushing for tougher measures against sexual violence also say the protests are being led by students familiar with the #MeToo movement and cases like that of former USA Gymnastics team doctor Larry Nassar and Bill Cosby. And they say a protest on one campus inspires them on others.

“It is this national push that we’re starting to see for accountability of colleges,” said Tracey Vitchers, executive director of It’s On Us, a nonprofit focused on building a movement to combat sexual violence on campuses.

More than half of sexual assaults against students occur between the start of fall classes and the Thanksgiving break, and generally freshmen and transfer students are the most vulnerable to sexual assault because they aren't familiar with the campuses and haven't solidified their social networks. Victims' advocates call the period “the red zone.”

“We’re in a period of a double red zone,” said Shiwali Patel, senior counsel for the National Women’s Law Center, who also directs its efforts to provide justice for assault survivors. “We have the first-year students and the second-year students who are now being on campus for the first time.”

The wave of protests started after a student reported being sexually assaulted at a University Nebraska-Lincoln fraternity house just before midnight on Aug. 24. Police received a separate report about a “wild party” there.

The following night, about 1,000 protesters surrounded the fraternity house. Police are investigating the assault report and the university temporarily suspended the fraternity’s operations as it reviews the group's conduct.

Protests at the University of Iowa began less than a week later against a chapter of the same fraternity over a year-old allegation of sexual assault that authorities are still investigating.

At Central Methodist University, a small Missouri liberal arts school between Kansas City and St. Louis, about 50 students protested this week in support of Layla Beyer, a 19-year-old sophomore who said a fellow music student sexually assaulted her during the first semester of her freshman year.

The university said it can't comment about an individual student's case, but spokesperson Scott Queen said, "There will be ongoing discussions regarding the topics addressed at the protest.”

Beyer reported the assault and said she received a no-contact order against her assailant, who played the same instrument and was constantly around. But she said he repeatedly violated it without facing serious consequences.

“A lot of times, survivors don’t have anybody to stand up for them besides themselves,” Beyer said.

Administrators at other colleges have said they’re committed to helping victims and educating students about appropriate behavior.

University of Nebraska Chancellor Ronnie Green outlined plans that included expanding from two members to four a team that helps victims, and improving training and education about sexual assault.