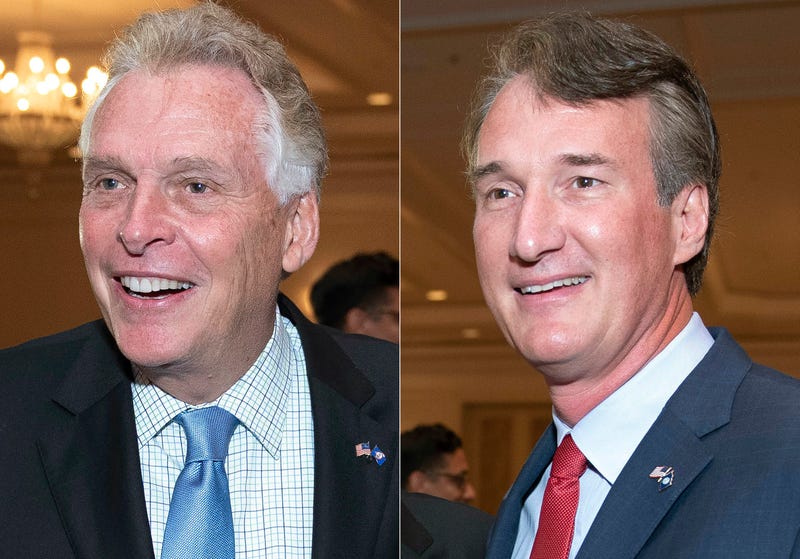 RICHMOND, Va. (AP) — When Donald Trump rallied Republicans this past week to vote for Glenn Youngkin for governor in Virginia, the former president called in to a gathering of die-hard supporters. That may be the closest he gets to campaigning in the most closely watched election of 2021.

While schedules could change in the final weeks of the race, the two are not expected to turn out together in person before the Nov. 2 election against Democrat Terry McAuliffe.

“Is Trump going to come to Virginia? Yes. But it will be after the election for a victory rally,” said conservative talk show host John Fredericks, who served as Trump's campaign chairman in the state and also organized Wednesday’s event. Youngkin’s campaign confirmed Friday it does not have any plans for surrogates to join him before Election Day.

The dynamic reflects the complex balancing act between Trump and Youngkin and could emerge as a model for other Republicans who face competitive campaigns in 2022.

Trump is the most popular figure in GOP politics and is eager to remain engaged. Youngkin needs Trump's supporters to come out and cannot risk giving Trump a reason to turn on him in the race’s final weeks. But Youngkin must avoid being tied too closely to someone who is unpopular in crucial swaths of the state, particularly the suburbs that surround Washington, D.C., and Richmond.

Youngkin steered clear of the Wednesday event that also featured longtime Trump strategist Steve Bannon. He soon could find himself charged with contempt for refusing to cooperate with a U.S. House committee investigating the Capitol riot. The Republican rally drew outrage after attendees recited the Pledge of Allegiance to a flag that the emcee said had been flown at the Jan. 6 insurrection. Youngkin later criticized the use of that flag.

While Trump remains the most powerful force in the party nine months after leaving office, he lost Virginia by 10 percentage points in 2020 and is viewed favorably by just 44% of likely voters in the state, according to a recent Fox News poll.

At the rally, Trump praised Youngkin as “a great gentleman,” while also spreading lies about the 2020 election he lost to Democrat Joe Biden.

Democrats quickly condemned what they said was “Donald Trump’s insurrectionist rally." McAuliffe's campaign cut an ad featuring Trump’s praise for Youngkin, and the Democratic nominee held a new conference to criticize his opponent, for his focus on “dangerous conspiracy theories” and his initial silence on the event itself.

Trump has little to gain by spending much more political capital on the race.

If Youngkin wins, Trump is sure to try to take credit, citing his participation in Wednesday's rally, his May endorsement and any future efforts to get out the vote. If Youngkin loses, Trump can blame him for not aligning himself more closely with the former president.

“The only guys that win are the guys that embrace the MAGA movement,” Trump said in an interview with Fredericks. “When they try and go down a railroad track, you know, ‘Hey, oh yeah, sure, I love it, love it. Oh yeah, I love Trump, love Trump, OK, let’s go, next subject.’ When they do that, they never win. They never win. They have to embrace it.”

Youngkin's campaign hasn’t featured many big name surrogates at his events, but McAuliffe has summoned Democratic star power. Biden has appeared with McAuliffe and the ex-governor's campaign told The Associated Press that the president will return before the vote. First lady Jill Biden joined McAuliffe at a rally Friday and former President Barack Obama will campaign with him this coming week.

Youngkin has aimed his pitch more toward moderate and independent voters since winning the primary. During that campaign, Youngkin declined to say whether Biden was fairly elected. Youngkin has since said he believes Biden was — and that he does not believe there was significant fraud in the 2020 election.

Instead of following in the mold of other blue-state Republican governors like Maryland’s Larry Hogan and Massachusetts' Charlie Baker, Youngkin has run on a solidly conservative set of platforms. He has embraced some GOP culture war issues and promised to help reject the “left liberal progressive agenda” that he says is shaping Virginia.

After mostly pivoting away from his focus on election integrity in the nomination contest, he’s centered campaign appearances and ads on crime, taxes, school choice and other issues.

Democrats have criticized him for recent remarks about auditing the state’s voting machines and for campaigning with state Sen. Amanda Chase, a prominent promoter of election falsehoods who’s garnered the nickname “Trump in heels.”