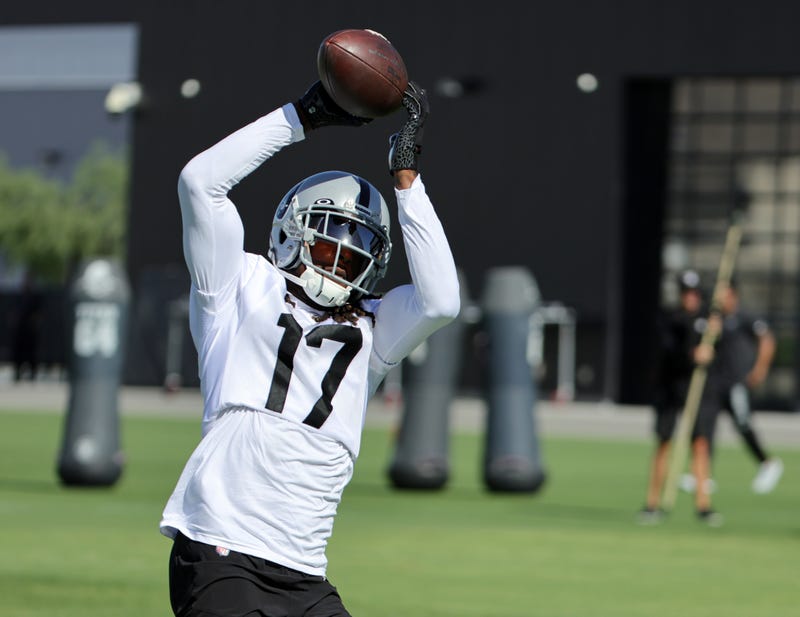 Henderson, NV (AP) - Davante Adams might be considered the best receiver in the NFL. His highly decorated resume speaks for itself, and he may have already authored a Hall of Fame career.

But in his first year with the Las Vegas Raiders, with a new coaching staff and offensive system in place, the ninth-year pro has no problem being back in the classroom.

“Obviously, it’s different any time you change places, but I’ve been enjoying it, it’s been really cool, teammates welcomed me with open arms right out the gate,” Adams said after practice Sunday. “I always feel that I can get better, I know I can get better so that’s always been my mentality.”

Reunited with his college quarterback Derek Carr, Adams figures to be the key figure for a passing game that ranked sixth last season with 4,567 yards. The Raiders were also tied for 16th with 23 TDs passing.

“We got a long way to go,” said Adams, who ranks fifth with 669 receptions and sixth with 8,121 yards since entering the league in 2014. “I’m feeling really comfortable as of now, about as comfortable as you can be at this point. But we’ve still got a lot to learn, a lot to work on, and just try to build off of what we kind of did in the spring.”

Still in place are Carr’s leading targets the past three seasons, tight end Darren Waller and slot receiver Hunter Renfrow, to go along with a bevy of others hoping to make the roster.

With 11 wideouts and six tight ends listed on the official training camp roster, Adams said he’s been impressed with the IQ of his well-versed teammates, who he explained understand their positions far beyond just putting their skill sets to use on the field.

“You can’t just have a bunch of speed or a bunch of size ... the mental part of the game is something that is really tough to teach,” said Adams, who led the Packers in receptions the past five seasons. “Having guys that understand how to set people up and how to find zones ... it makes it a lot easier for me as a vet coming in trying to try to teach guys especially when I still got a lot to learn.”

Waller said having Adams on the roster has brought a “great energy to the room” that has elevated everyone to his level.

But his impact on the team hasn’t been limited to the offensive side of the ball, either.

While he was the prize acquisition for the offense during the offseason, the team’s top defensive grab, veteran defensive end Chandler Jones, has been equally inspired.

“Davante is incredible and what I will say is that he’s a very hard worker,” Jones said. “A lot of times you get around guys that they have the accolades, and they have the big name and I feel like they get complacent. But not Davante, he’s a guy that he works hard. If he messes up a drill, he’ll do it again. And those are the characteristics that you need because there’s a lot of people watching. There are young players behind him watching, there are coaches watching, and he’s a guy that definitely works.

“For the things that he does on Sundays, he works for that.”

As complimentary as his teammates were of him, the five-time Pro Bowl wideout said he’s been motivated by them and has felt the need to run as fast as he can and go as hard as he can on every route during the first week of camp, whether the ball is coming his way or not.

It’s part of the learning process with his new teammates and new coaching staff.

“There’s something you can always be better at,” Adams said. “I like to think that one of my best attributes is my mental approach and my understanding of the game of football, especially obviously my position. So anytime you got a bunch of guys that also understand what they’re doing, it just makes it that much easier on the coaches and the quarterback.