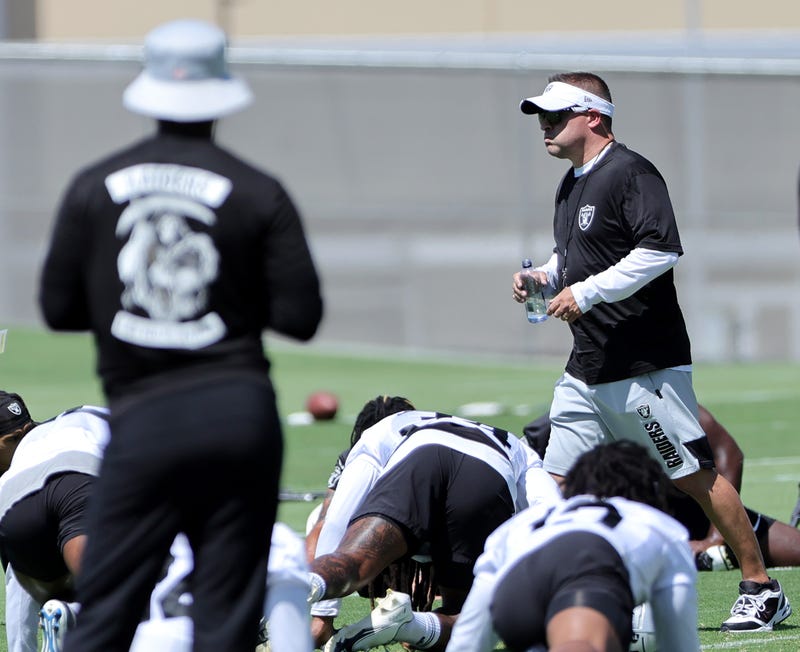 Especially with a ninth-year veteran leading a retooled offense.

“Our system is different than anything I’ve been in before,” quarterback Derek Carr said Tuesday after the first day of mandatory minicamp. “I see why it was so successful.”

Like everyone else who has spoken about the Raiders’ new regime, Carr is back to square one in learning the unit he’ll direct this fall when the team navigates one of the league’s toughest schedules.

Carr’s college wideout and close friend Davante Adams has joined the quarterback’s leading targets from the past three seasons, Hunter Renfrow and Darren Waller, and now it’s a matter of getting everyone on the same page in a new playbook.

And as patient as McDaniels may be, the pressure is on a little more than 13 weeks before the Raiders open the season at the Los Angeles Chargers.

The good thing for him, adapting is nothing new.

Carr has had to learn from a new coach a few times during his tenure. From going through two head coaches his rookie season to three years with Jack Del Rio to Jon Gruden for four and a half seasons, to Rich Bisaccia midway through last year’s tumultuous campaign.

This time around, he’s appreciative of a system he’s admired for quite some time.

“I was always a fan of (New England) coach (Bill) Belichick and I was very intrigued by the things that they would do schematically,” Carr said. “Just being in it and learning it, the details of it. Having the OTAs to grind through, that has been huge, but drawing on past experiences helps me. ... We can move on faster to get to other things. Hopefully, that’ll help us get everything in a speedy process, but I’m still learning like everybody else.”

Like the entire offensive line, a unit that needs to improve after struggling in 2021. The Raiders allowed the 11th-most sacks (44) and rushed for the fifth-fewest yards (1,617) last season. Their 3.9 yards per attempt were tied for fourth lowest in the NFL.

“There’s a lot of new stuff to install and (offensive line coach Carmen Bricillo has) been doing a great job explaining it, getting us on the right page,” Kolton Miller said. “Young guys, they’re trying to absorb as much as they can. And our job as old guys is we’re trying to show them the ropes.”

McDaniels said there is no prioritization in terms of improvement and tweaking things in terms of the units within the offense. Not yet at least, as he wants to be able to add physical and mental aspects that will challenge each player so he can see their ability to withstand what’s thrown their way during training camp.

Right now McDaniels said he’s trying to learn the same way he expects his players to assimilate during spring ball with plenty of work to do before camp opens in mid-July.

“I think there’s an overall priority to try and understand the foundation of our system, the techniques we would ask each of them to use,” said McDaniels. “We’ll know a lot more once spring is over and we’ll have a chance to digest that information. Then well reprioritize certain things when we head into training camp.”