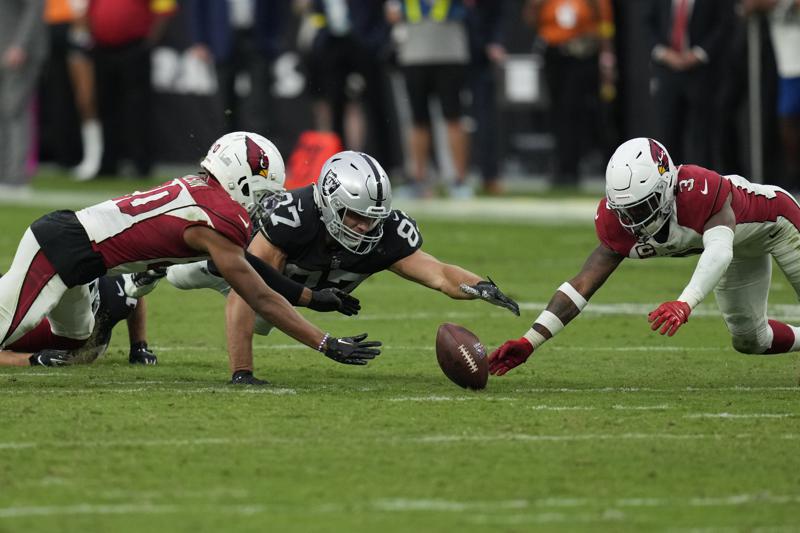 They just haven’t been able to put together four good quarters in the same game.

Following their 24-19 loss at Los Angeles, in which they outscored the Chargers 16-7 in the second half, the Raiders squandered a 20-0 halftime lead and lost to Arizona 29-23 in overtime this past Sunday.

And with back-to-back AFC West games against Denver and Kansas City on deck, the Raiders (0-2) are feeling the importance of Sunday’s game at Tennessee.

“The urgency is definitely there right now,” receiver Davante Adams said. “There’s a lot that went into why we didn’t win that football game this past week, but at the end of the day, a loss is a loss. So we got to be on our stuff and get ready to go out there and get a win.”

The Titans (0-2) are just as hungry for their first win.

“You have to play with an urgency,” Tennessee quarterback Ryan Tannehill said. “You have to, first of all, prepare with an urgency starting today. We have got a good jump on it today, but it is about coming in with an intention and a focus and being able to execute. ... It requires being able to play consistently through four quarters — not just one drive, not just a half, but play for four quarters.”

That’s something Las Vegas couldn’t do while suffering the biggest blown lead in franchise history. The Raiders gained 66 yards on 24 plays in the second half, after racking up 258 yards on 38 plays through the first two quarters.

By some metrics, the Raiders’ offense has been solid. It ranks tied for fifth in the NFL in offensive drives ending in a score (45%), but Las Vegas hasn’t performed as well as expected given its glut of playmakers: quarterback Derek Carr, Adams and fellow receiver Hunter Renfrow, tight end Darren Waller and running back Josh Jacobs.

“Win or lose ... we’re gonna correct it and we’re gonna work,” Carr said. “There’s no heightened sense (of urgency) — it should always be heightened.”

The Raiders and Titans are two of three playoff teams from a year ago to start this season 0-2.

“We should all be desperate to win each week, in my opinion,” first-year coach Josh McDaniels said. “And I think that’s the way our team should think and hopefully that’s the way they do think. We don’t ever take the field to do anything other than win. So, we have the same urgency this week as we have.”

McDaniels said the mindset would be the same if his team were 2-0.

“If I change that, I would basically be telling my football team that this week’s more important than last week or what have you — they’re all important, every day is important,” McDaniels said. “I think it’s important for us to be consistent, and try to learn from the things we haven’t done well. Whether we won or lost, there’s gonna be a lot of lessons to learn. Nobody plays a perfect football game.

“It’s gonna take a lot of mental toughness this week to go there on the road against a really good football team and grind it out. But that’s what we’re getting ready to do this week and to practice and prepare the way we need to prepare to play.”

NOTES: The team announced it acquired tackle Justin Herron and a 2024 seventh-round pick in a trade with the New England Patriots. Las Vegas sent a 2024 sixth-round pick to the Patriots. Herron, drafted in the sixth round out of Wake Forest in 2020, has appeared in 28 games during his career, including 10 starts last season for the Patriots. In a corresponding move, the Raiders waived cornerback Javelin Guidry.