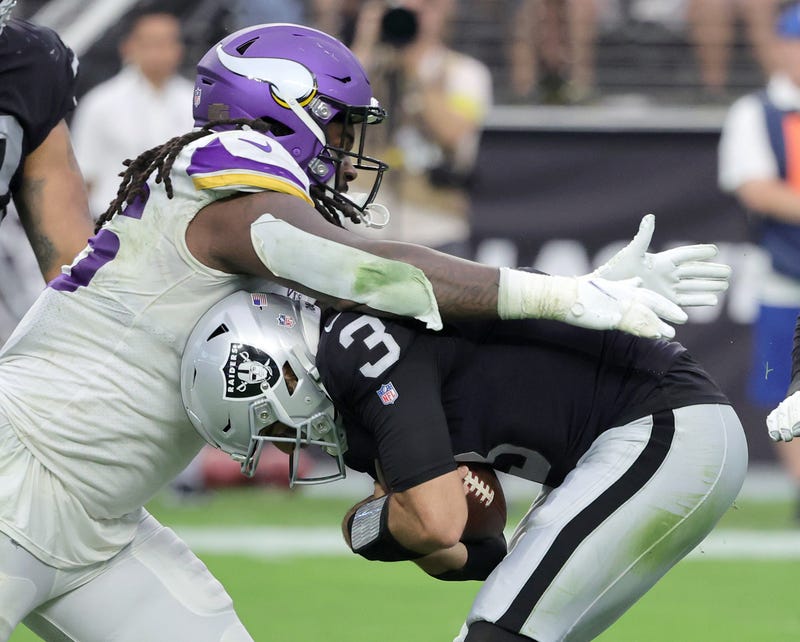 Las Vegas, NV (AP) - The Las Vegas Raiders have used 14 offensive linemen in 13 rotations across 20 possessions in their first two preseason games all in search of a dependable five-man unit for the regular season.

And first-year Raiders coach Josh McDaniels says it’s not out of the ordinary.

“I don’t really think this is unique at all, this is really normal,” McDaniels said Monday. “There’s just too much to be gained in training camp for you to forego the opportunity to work with different groupings. If you put five guys together, and that’s the only five guys they practice besides, you’re doing them a disservice because it’s not realistic.”

Maybe not, but when you’re looking to overhaul a unit that allowed significant pressure all season on the right side in 2021, it is important to find the right pass protection for veteran quarterback Derek Carr.

The results through two preseason games haven’t been great with the Raiders having allowed nine sacks. Those sacks mean a lot when every lineman in camp is competing for a spot on the 53-man roster.

There has been at least one sack against a rotation involving every lineman who has played a down for Las Vegas thus far, although several of those players will be backups or off the roster when the season starts.

The biggest issue is at right tackle. Brandon Parker, who opened camp as the starter there but is now out with an undisclosed injury, was on the field for three sacks in the Hall of Fame Game, with each of them coming from players he was lined up against.

Last year’s first-round pick Alex Leatherwood didn’t even get into the second game against Minnesota until the second half while seventh-round rookie Thayer Munford got the start.

“He’s used to coaching the entire group as one unit,” McDaniels said. “That’s really what we’re trying to harp on offensively is, whether it’s the five offensive linemen or it’s the 11 guys on the field together, we have to be able to work with one another, regardless of who they are. They’re never going to be the same guys for the entire year or even for an entire game.”

With one of the weakest offensive lines last season, Bricillo has his work cut out for him leading up to the regular season, especially with Parker out indefinitely and Denzelle Good retiring mid-training camp.

Left tackle Kolton Miller seemingly has his spot locked up, while left guard John Simpson and center Andre James appear to have firm grips on their spots as well.

That leaves McDaniels and Bricillo to sift through 11 linemen to shore up the right side of the line.

Leatherwood, who started last season at right tackle and guard, is one of those players vying for a spot on the right side this year.

“We got an active competition going on, it’s training camp,” Leatherwood said after Sunday’s 26-20 win over Minnesota. “So you’re getting everybody in at different spots, go with different people, and we all just competing trying to find the best five.”

McDaniels said he’s pleased with the depth he’s got while watching the offensive line competition. After Sunday’s win, he said he feels there is plenty of time with the regular season more than three weeks away.

“There are some guys that maybe didn’t start (Sunday) for one reason or another that will be starting on opening day at some point,” McDaniels said. “But the competition is real. It’s ongoing, and I think it’s the healthiest thing we have going for us in the locker room because it makes everyone better. When they know they come to work — and there’s something to be said about each day’s work that they put in — that makes it more important. They come in with a great attitude, a great approach, and I think it’s made our team better.”