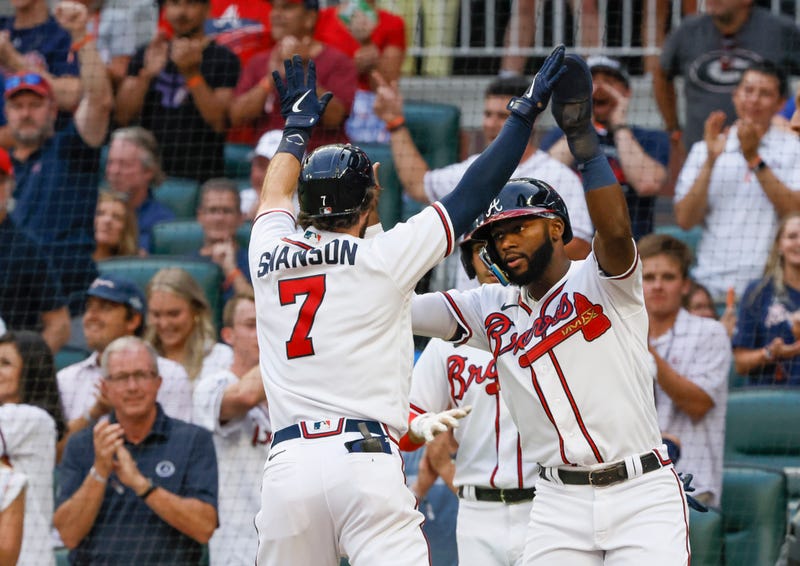 ATLANTA (AP) — Marcell Ozuna hit a tiebreaking homer in the eighth inning and the Atlanta Braves recovered after blowing a three-run lead to beat the Los Angeles Dodgers 5-3 on Saturday night.

Travis d'Arnaud led off the seventh with a double to left field off Brusdar Graterol (2-3). Ozuna followed with his 14th homer to center field.

Dodgers designated hitter Will Smith tied the game at 3 with a homer to left field off A.J. Minter (4-1) to open the eighth.

Freddie Freeman had one hit with three strikeouts — including a bases-loaded whiff to end the seventh — in the second game of his much-anticipated return to Atlanta. The 2020 NL MVP with the Braves appeared more relaxed after his emotional return Friday when he received his 2021 World Series championship ring in a pregame ceremony.

Braves left-hander Max Fried allowed six hits with nine strikeouts and one walk in 6 2/3 innings. Former Dodgers closer Kenley Jansen struck out the side in the ninth, including throwing a game-ending fastball past Trea Turner, for his 19th save.

Cody Bellinger had a run-scoring single off Fried as the Dodgers scored two runs off Fried in the seventh.

Braves reliever Will Smith gave up Austin Barnes' run-scoring single to right, cutting Atlanta's lead to 3-2 before walking Turner to load the bases. Smith struck out Freeman to end the inning.

Freeman said after Friday night's game he was physically and emotionally drained. He enjoyed a more normal routine on Saturday. He had his 5-year-old son, Charlie, with him on the field for early fielding practice.

The teams have split the first two games in the rematch of the past two NL championship series. Freeman reached base three times and scored two runs in the Dodgers' 4-1 win on Friday night.

White was added to the rotation after left-hander Andrew Heaney was placed on the 10-day injured list on Friday with left shoulder inflammation.

Braves rookie Michael Harris II led off the third with a double which Dodgers right fielder Trayce Thompson misplayed. Thompson took a step in before stopping, unable to recover as the liner sailed over his head.

One out later, Swanson hit a first-pitch slider 413 feet over the center field fence for a 2-0 lead. It was Swanson's seventh homer of June and 13th overall. Swanson has hits in 18 of his last 19 games.

A three-man crew of umpires started the game before Alex MacKay, a late fill-in, arrived in the fourth inning. MacKay was summoned when Cory Blaser could not work the game for medical reasons.

Dodgers: RHP Daniel Hudson's torn left anterior cruciate ligament was confirmed, ending his season. Hudson’s knee buckled in the eighth inning of Friday night’s 4-1 win over the Braves as he reacted to a dribbler hit by Acuña. Hudson’s recovery is expected to take six to nine months. ... Alberto was activated from the paternity list and OF Stefen Romero was designated for assignment as a roster space was cleared for White.

Braves: OF Eddie Rosario (blurred vision, swelling in right retina) was assigned to Triple-A Gwinnett for a rehab assignment. Rosario was placed on the IL on April 25 and he was expected to play in Saturday night's game in Nashville.

Dodgers RHP Tony Gonsolin (9-0, 1.58) will put his unbeaten record on the line when he faces Braves rookie RHP Spencer Strider (3-2, 3.40) in Sunday night's final game of the weekend series.