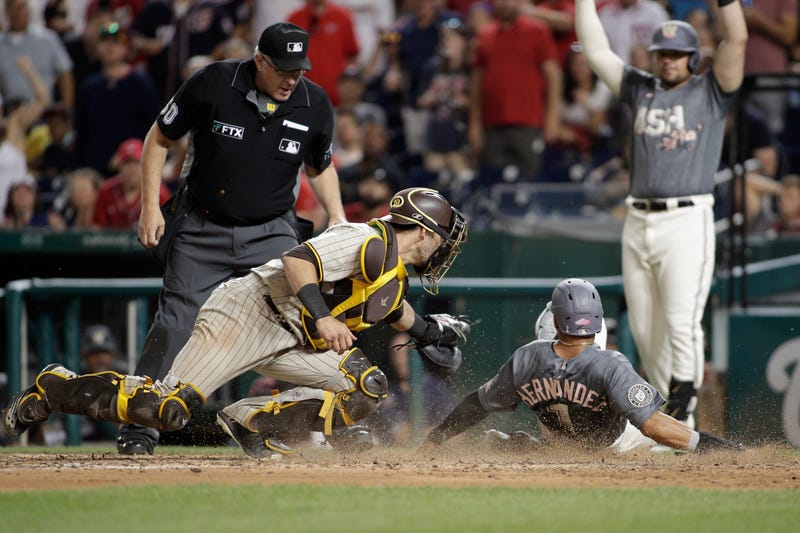 WASHINGTON (AP) — San Diego Padres manager Bob Melvin was sure his catcher, Austin Nola, was not guilty of blocking the plate. So sure that the skipper immediately got ejected after Nola was called for that transgression on a replay review, allowing the Washington Nationals to score the go-ahead run.

Nola was not worried the apparent out — it was ruled that way in real time — would get changed.

“I had no concern,” Nola said.

So cue the questions and dial up the debate over what constitutes preventing a runner from reaching home — Melvin said it was the subject of a recent memo from Major League Baseball — after the wild-card-chasing Padres and new slugger Juan Soto repeatedly failed to come through in the clutch against his former club and lost to the Washington Nationals 4-3 Saturday night.

“If that’s an out, we’re still in the game,” Melvin said, arms crossed, afterward.

“I thought it was a good play. My understanding is: If you’re straddling the plate or giving him any part of the plate to slide to, it is not blocking the plate.”

Playing their second game since learning of Fernando Tatis’ steroid suspension, the Padres built a 3-0 edge thanks to solo homers from Manny Machado and Trent Grisham and a run-scoring single from Soto, who was traded by Washington on Aug. 2.

But San Diego's offense stalled: The club finished 2-for-12 with runners in scoring position and left 13 runners on base.

“We had opportunities, for sure,” said Nola, who went 1 for 3. “We've just got to capitalize on our opportunities.”

Yu Darvish (10-6), charged with four runs in six-plus innings, gave away the lead on back-to-back deep balls off the bats of Yadiel Hernandez and Joey Meneses in the sixth. Meneses, a 30-year-old who made his big league debut on Aug. 2, now has five homers in nine games.

Then, with Luis García on in relief after Darvish gave up a single, Victor Robles, who came into the day batting just .229, smacked a single to right, where his good pal Soto plays. César Hernández — who had three hits and a stolen base for the night — raced home from second base.

Soto’s throw reached the plate just as Hernández did — and after Nola tagged him with one foot on home, the runner was called out. Washington manager Dave Martinez challenged, and the appeal succeeded, meaning the run counted and the Nationals snapped the 3-all tie.

Martinez said he thought “right away” that Nola “blocked the plate, for sure.”

“I just felt like when I caught the ball, I stepped back just in case I was in front of the lane. That’s all I know that I did. It’s just the step-back happened to be on the plate,” he said. “I thought I did everything the way we practice: Step back, give him a lane, not throw the knee in front.”

Melvin argued with crew chief Paul Emmel, even walking over to step on the plate while making his point. That came hours after Melvin reached out to Tatis for a phone conversation. On Thursday, the All-Star shortstop was banned for 80 games — meaning he is gone for the rest of 2022 and the start of 2023 — after testing positive for a performance-enhancing drug.

“To do it as long as he’s done it, it’s amazing to me,” Martinez said. “He puts himself in a good position to hit every ball.”

After Washington starter Aníbal Sánchez allowed three runs in five innings, Kyle Finnegan (4-2) threw a scoreless seventh, and Carl Edwards Jr. worked the ninth for his second save of the season.

Nationals: SS Luis García was out of the starting lineup with a strained left groin. ... LHP Patrick Corbin is scheduled to start Tuesday. ... RHP Erick Fedde (15-day IL; right shoulder inflammation) is expected to make a rehabilitation start at Triple-A Rochester on Wednesday.