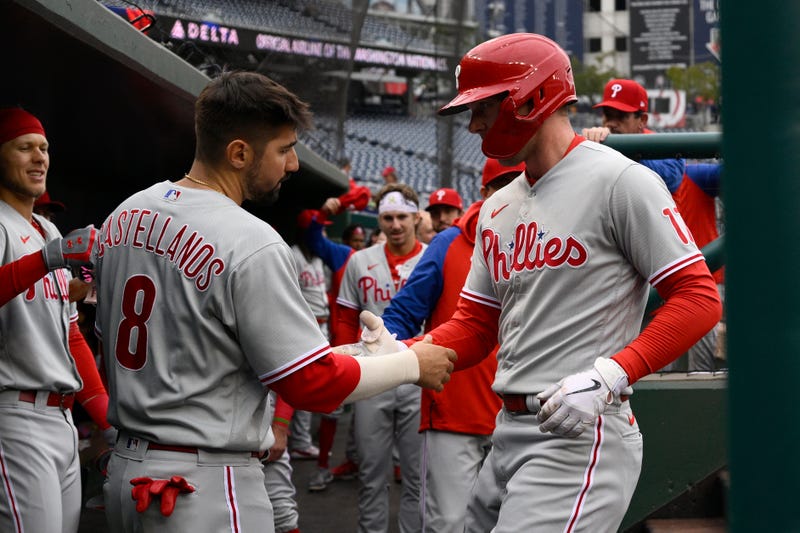 WASHINGTON (AP) — Rhys Hoskins hit his 30th home run, Bailey Falter pitched six scoreless innings and the Philadelphia Phillies boosted their lead in the National League wild-card race with a 5-1 win over the Washington Nationals on Friday in the opener of a day-night doubleheader.

Philadelphia (84-72) snapped a five-game losing streak and moved a full game ahead of the Milwaukee Brewers for the final NL wild card.

J.T. Realmuto had two hits and stole three bases, giving him 21 steals and 21 home runs. He is the second 20-20 catcher in major league history after Ivan Rodriguez of the Texas Rangers in 1999 (35 homers, 25 stolen bases).

Falter (6-4) was roughed up for six runs on 10 hits over 3 2/3 innings against the Braves in his last start. He was far better on Friday, allowing just three hits and two walks while striking out six.

The Nationals loaded the base against Seranthony Dominguez with one out in the ninth, but Dominguez struck out Victor Robles and César Hernández grounded out.

The Phillies have defeated the Nationals nine straight times and in 14 of their 16 games this season.

Hoskins made it 1-0 on a homer in the first.

Juan Segura had a two-out RBI single in the fourth. Nick Castellanos reached on an error in the sixth and later scored on Jordan Weems' balk.

With the Nationals within 3-1, Hoskins added an RBI single in a two-run ninth.