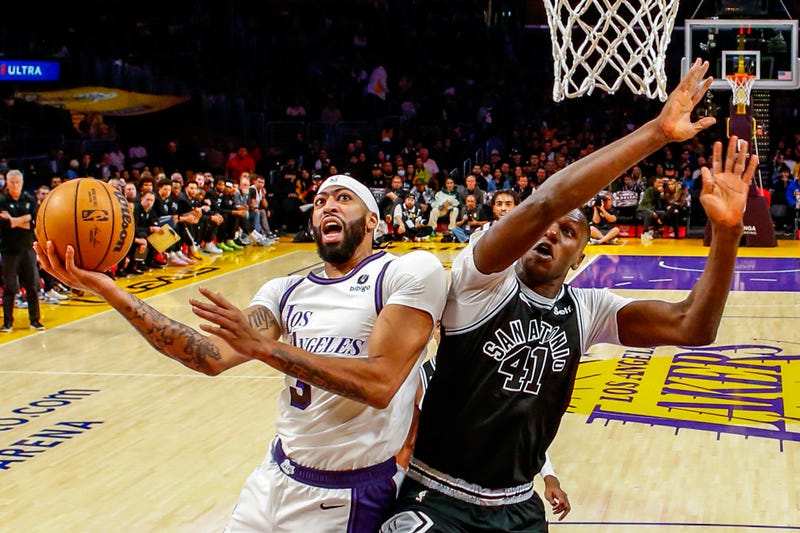 LOS ANGELES (AP) — Anthony Davis had 30 points and 18 rebounds, and the Los Angeles Lakers beat the San Antonio Spurs 123-92 Sunday night to win three straight games for the first time since the first week of January.

While LeBron James missed his fourth straight game with a left adductor strain, Davis came through with yet another prolific performance in his fellow superstar’s absence, producing three straight 30-point games for the first time since March 2020. Austin Reaves also scored 17 of his season-high 21 points in the first half before the Lakers cruised to a victory that boosted the Pacific Division's worst record to 5-10.

“Everybody's confidence is very high, while not getting too high,” Davis said. “Feels good to get three in a row. Now we've just got to carry it over to the road. Got to put some more wins together.”

Spurs coach Gregg Popovich missed the game with an illness after feeling unwell shortly before tipoff. Assistant Brett Brown ran San Antonio's sideline in the absence of the 73-year-old Popovich, the winningest coach in NBA history and the Spurs' bench boss since 1996.

“When something like that happens, you're concerned,” Brown said. “But the doctors have checked him out. I was just with him, and as we speak, he is fine.”

Brown said he learned Popovich wouldn't be coaching “as I was walking out on the court ... 20 seconds before the game was going to begin." Popovich stayed at the arena during the game, which was San Antonio's fifth game on the road in seven nights.

“It's always a human thing," Brown said. “He’s a dear friend of mine. We've been with each other, known each other for a quarter of a century. That's not a short period of time, and so my immediate reaction is, ‘How is he?’ He has such amazing endurance, and he's such an amazing competitor, when something like that happens, you're concerned.”

Devin Vassell scored 17 points for the Spurs, who have lost five straight and 10 of 11. Gorgui Dieng added seven points and seven rebounds while starting in place of injured Jakob Poeltl.

Lonnie Walker scored 14 points against his former team for the Lakers, but Los Angeles is being led by Davis, the oft-injured big man whose arrival led directly to the franchise's 17th championship in 2020. He had missed about half of the Lakers' games since raising the trophy, but he has capitalized on a stretch of good health to lead Los Angeles back from its miserable start to the season.

“AD, he has to be the focal point,” Lakers coach Darvin Ham said. “He has to spearhead the charge. That's the way we're built. He's embraced it. When Bron gets back, if AD can sustain that level, we're going to be as good as our preparation makes us.”

James hasn't played since injuring his groin Nov. 9 against the Clippers. Ham said they're being deliberately cautious with the return of the 20-year veteran, feeling time is on their side.

Spurs: Poeltl sat out with soreness in his right knee. The Utah product had been the only player to appear in every Spurs game this season. ... Popovich's 1,350 regular-season victories are the most in NBA history.

Lakers: Russell Westbrook had 10 points and 10 assists, but left the arena with a wrap on his right thumb. X-rays revealed no fractures, and he will be re-evaluated Monday. ... Juan Toscano-Anderson missed his second straight game with back soreness. ... Walker spent his first four NBA seasons with the Spurs, who picked him 18th overall in 2018.

Lakers: At Phoenix on Tuesday.