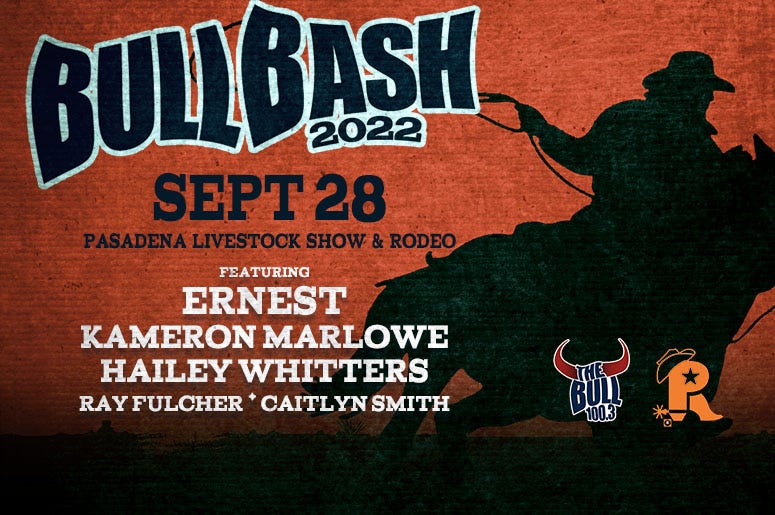 Bull Bash 2022 will be an acoustic performance from Nashville's most respected singer song-writers and the master minds behind some of the biggest country songs in the last decade.

This year's lineup includes Ernest who has written numerous singles for Morgan Wallen including his latest #1 single "Wasted On You." Ernest is an incredible artist, song-writer and performer in his own right and is now emerging out of the pack as one of the most prolific voices of Country Music.

Ray Fulcher will also be on stage at Bull Bash 2022 with accolades from his work with Luke Combs. "Lovin' On You", "When it Rains it Pours" & "Does To Met" are some of the #1s penned by Ray Fulcher and on September 28th, he gets to show off his talent at the Pasadena Rodeo.

Kameron Marlowe has garnered the love of fans throughout Houston after launching his career during the pandemic. Kam's raw talent will be on full display on the third Wednesday in September at the 73rd Pasadena Rodeo. His most popular tracks are "Tequila Talkin" & his current radio single "Giving You Up."

Caitlyn Smith is one Nashville's best kept secrets but we're bringing her to Houston to get the word out. She'll be joining Bull Bash 2022 with her current single "Downtown Baby" at radio and will put her talent on full display. She's written music for Chris Stapleton, Jason Aldean and had a widely successful pop single called, "Like I'm Gonna Lose You" which was performed by John Legend and Meghan Trainor.

Finally, newcomer, Hailey Whitters comes off tour with Jon Pardi to perform at Bull Bash 2022! Her debut radio single is called, "Everything She Ain't" and she has an entire catalogue of great music!

We hope you'll join us for Bull Bash 2022 at the 73rd Pasadena Livestock Show & Rodeo on Wednesday, September 28th at the Pasadena Fairgrounds! Tickets are $20 at www.pasadenarodeo.com