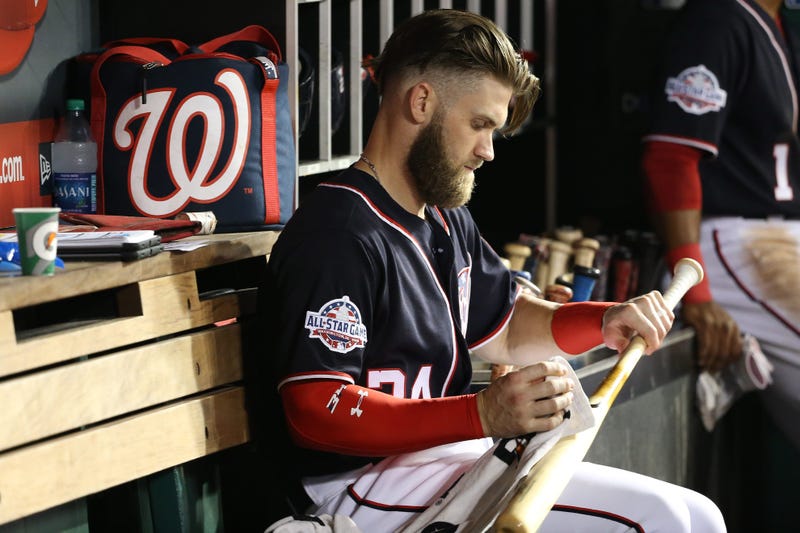 The Philadelphia Phillies said they would pay "stupid money" for a top free agent and on Thursday they put their money where their mouth was: Agreeing to a 13-year, $330 million deal with Bryce Harper.

Wait, so the Washington Nationals lost out on the 26-year-old slugger's signature because their NL East rivals offered an extra $30 million and three more years on the contract?

Well, yes and no.

Yes, the Nationals made an aggressive offer, which was reported to be in the neighborhood of $300 million over 10 years, to Harper before the end of the 2018 season.
But, the $300 million the Nats offered is very different to the $330 million offered by the Phillies. And the reason is in the amount of deferred money.

Comparing Nats 10/300 offer to the Phillies 13/335 is not apples to apples. Nats offer has not been on the table in months. Also I was told 9ver $100M of the Nats offer was in deferred payments and Phillies was front loaded. "Left for $30M more" is a bad take. Also $30M is a lot.

Like Manny Machado's deal with San Diego, Harper's deal with the Phillies contains no deferred money, according to The Washington Post's Barry Svrluga. This means the average annual value of $25.4 million is accurate for the 13 years of the contract.

This is very different to the offer from the Nationals which contained a significant amount of deferred cash. Earlier in February, two sources told MLB.com roughly $100 million of the Nats' aggressive offer was deferred. And that money was significantly deferred. Tom Verducci reported in Sports Illustrated the Nationals offer carried a "net present value" of only $184 million over 10 years due to the deferrals.
Svrluga reports the amount of deferred money made some in MLB "queasy" and would have paid Harper until he was 60.

Some context on the Nats' 10-year, $300-million offer:I'm told from two sources that a significant -- like, made MLB queasy -- amount of money was deferred. One source said it included $100-million in deferrals and paid Harper until he was 60.The PHI deal has no deferrals.

This makes comparing the Nationals offer and the Phillies offer a matter of apples and oranges, as Harper's average salary would have been far lower than $25.4 million.

The Nationals have often used deferred money when signing players to massive contracts in the past. The organization deferred half of the $210 million in Max Scherzer's seven-year deal he signed in 2015 and will pay him $15 million over seven years until Scherzer is 43. Washington will delay paying Stephen Strasburg $70 million from his big contract, handing that cash out from 2024-2030 ending when he is 41.

Clearly, Harper wasn't interested in a deal that structured payments in this manner and clearly the Nationals were not interested in deviating from the preferred deferred style.