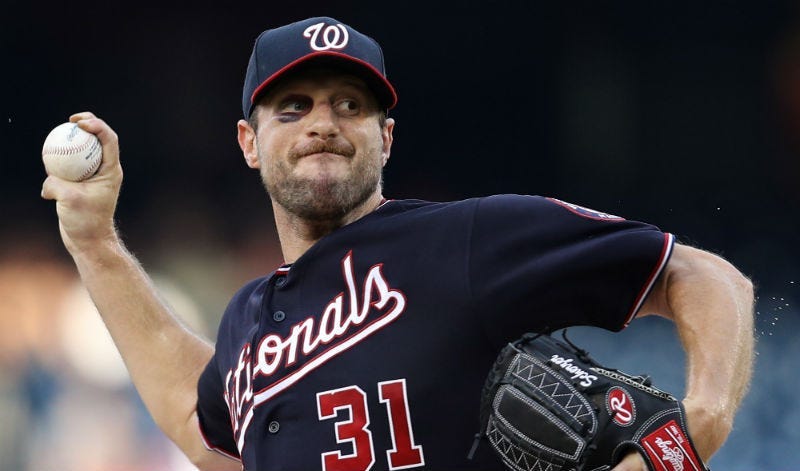 In retrospect, it seems obvious. Of course, this is what would happen. Mad Max is gonna do what Mad Max does.

Why wouldn't Max Scherzer, a day after busting up his face in a bunting drill, start and dominate the Philadelphia Phillies? He's the ace, that's what aces do.
Didn't everybody see this coming? Grant Paulsen had this locked in the night before Scherzer took the hill.

And going 7 and punching out 10 breathing through his mouth.

"Knowing Max, he's gonna give every effort to go out there and pitch tonight," Nationals GM Mike Rizzo told The Sports Junkies before the game. "It's his day. He's, like I said, a creature of habit. He likes to stay on rotation. We'll see when he arrives today if he's capable of pitching tonight. If not, it shouldn't be too much in the distant future where he gets on the mound."

After a 6-2 win in Game 1 of the doubleheader, the Nationals were looking for a sweep to get back to three games under .500.

So you do what you always do: Give Max the ball.

“Trust me, this thing looks a lot worse than it actually is,” Scherzer said. “You take the ball every fifth time, that's my responsibility to the team.”

Wednesday night's performance from the most intimidating pitcher in the world in one word: Competitor.

Broken nose, black eye and all, with his 117th pitch, Scherzer finished with a flourish and a nasty slider.

“On a scale of 1 to 10, the pain today was a zero,” Scherzer said. “Going out there and throwing, the only thing I had to deal with was the swelling underneath the eye. It was kind of jiggling around.”

And the performance didn't go unnoticed by his teammates.

“It really is one of the most impressive things I’ve seen in a while,” Brian Dozier said. “He’s probably the best pitcher of our generation, and you don’t get that status unless you take the ball every fifth day — no matter if you’re doing good, doing bad, you have a broken nose. You always want the ball.”

Was there ever any doubt?