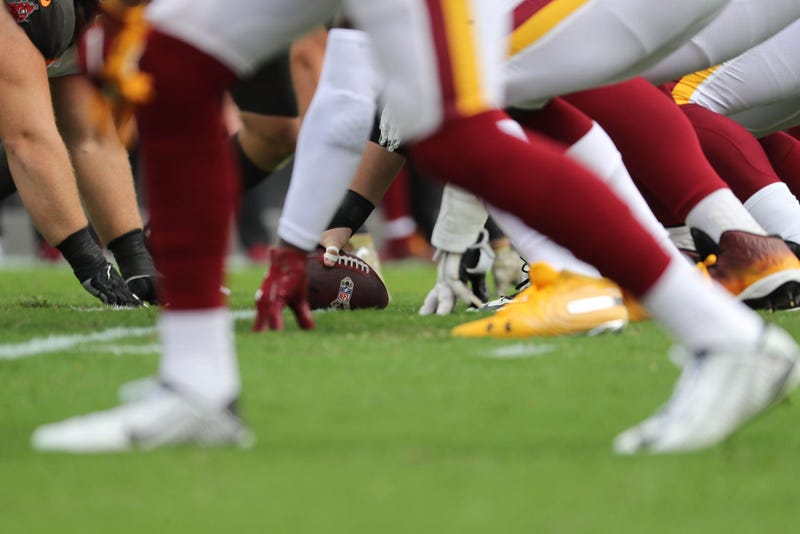 106.7 The Fan Redskins beat reporter Craig Hoffman was in the press box at Raymond James Stadium as the Washington Redskins took on the Tampa Bay Buccaneers in Week 10 of the season. He combined his observations with post-game interviews to write his top-three takeaways from this week in football:

Of all the football games I have ever seen, this was amongst them.

1. The Redskins offensive line did not hold up. The run game was not as potent as it had been in previous Redskins wins. Jonathan Cooper also committed penalties on two big plays to bring them back. The offense didn’t help itself either. It was disorganized. The Redskins burned two timeouts in the 3rd quarter because they didn’t have the right people on the field.

However, in both instances, the Redskins converted the ensuing 3rd downs and the second of the two instances was on the first touchdown drive. That drive concluded with an outstanding play from Alex Smith. Smith has been antsy in the pocket this season. On this play, he started to leave, before settling back in and scanning the back line. Doctson came open long enough for Smith to fire a rocket for the score. The former first rounder made a contested catch in traffic, proving again he tends to make the difficult routine while his mistakes more frequently come on routine plays.

2. The defense did a lot of bending, but they made plays to help from breaking. It started early with a Josh Norman interception on Tampa’s first drive. The next huge play came from Greg Stroman immediately following Washington’s first score. The Redskins kicked a field goal and then Tampa started marching again before Ryan Anderson made the most impactful play of his career thus far, hustling down Jacquizz Rodgers and punching a ball as hard as I’ve ever seen a football punched. Ha Ha Clinton-Dix eventually fell on it in the end zone for a touchback and the Bucs realistic chances at winning were over.

They made another drive deep into Redskins territory, only to see Fitzpatrick get strip-sacked by Preston Smith. The totals at the end for Tampa: 498 yards, 29 first downs and three points thanks to four turnovers. It’s easy to say “that’s not how you draw it up,” but against the Bucs it somewhat is. You know that they will give you chances. Tampa did. The Redskins took advantage.

3. Tress Way continues to be the Redskins MVP. Way pinned the Bucs inside the 20 four times, while averaging 49.4 yards per punt. That includes one punt where Way pulled the string and the ball died at the three. His one punt that didn’t land inside the 20 was fair caught at the 22.
Stat of the day: The Buccaneers punted once. They scored only three points. This is the fifth time since the 1970 AFL-NFL merger that a team has scored less than three points with one or fewer punts. It’s the first time the team completing that feat had over 200 yards passing. The Bucs threw for 403.
Quote of the day: Josh Norman was asked about playing better on the road. Here’s his response, in full:

"I feel like we play better on the road. I’m not gonna lie. Gosh man. It seems like our true fans, they’re really with us on the road and we feed off of that. When we go into the home stands, it seems like (sigh) an open bubble or something. Like the other team’s turf or something. You hear more of them than you do us. Then, if something bad happens, they sulk. They sit back in their seat and they boo. I don’t know. It started to be this year that we started to see that. It’s kinda crazy because the first couple of years I’ve been here, you would see sellouts and all happy and excited and all for the Redskins, but now you go around see the whole NFC East teams – the Philly’s, the Giants and even Dallas --- they sold out. People in the seats, they’re cheering for their team. Regardless good, bad or indifferent they still showing up each and every week going hard. Even the Giants, when they was 1-6, hell they had a sellout crowd. They was all in there packed still!

"We come back to our home and guys…they just don’t really care. They just boo everything. They’re not really behind us. We don’t really feel that. I’m tired of it. I really am. We can play all our games on the road if you ask me, but at the end of the day the people who are going to be for you, the fans that are really going to have your back? They’ll be there. The other ones, man? It is what it is. Can’t really speak on them. They’re gonna talk about what they’re gonna talk about anyway. They all keyboard warriors anyway.”

Norman followed up that statement to the media with this tweet:

6-3 1st NFC-EasT, 1st time in along time that in itself should be ---- We worked on our craft to get here. Now it's you guy's turn.FedexField, is a place where visitors should 'Fear' Not b/c of Us. But b/c of how Terrifyingly Loud!&Menacing! YOU guys the FANS are. Come on #HTTR--

This will obviously upset a lot of fans. It’s also not wrong. The best way to make everyone happy? Show up in numbers on Sunday and have the players put on a performance worth cheering for. The Redskins are 6-3 and atop the division.