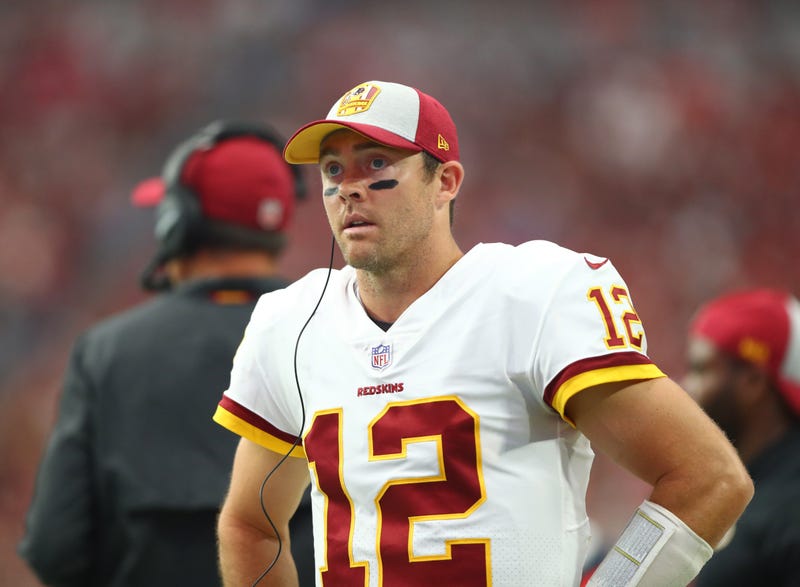 106.7 The Fan Redskins beat reporter Craig Hoffman was in the press box at Lincoln Financial Field as the Washington Redskins took on the Philadelphia Eagles in Week 13 of the season. He combined his observations with post-game interviews to write his top-three takeaways from this week in football:

This sport is weird. This sport is cruel. This sport is unforgiving. The Redskins were reminded of that yet again Monday night when their starting quarterback broke his lower leg and had his season ended for the second time in three weeks.

1. Colt McCoy was 4-for-4 for 50 yards in what turned out to be his final start of the 2018 season. His final two plays were played on a broken right fibula. That is one of the two bones that Alex Smith broke. Mark Sanchez came in to relieve McCoy and on his first snap handed the ball to Adrian Peterson, who galloped 90 yards for a touchdown. It was a flash of excitement in an otherwise brutal night.

Despite that 90 yard carry, Peterson finished the game with just 98 yards. He only had nine carries. Chris Thompson, whose first two carries looked promising, only got one more. It was a perplexing series of events considering the game was tight until the final quarter. Sanchez looked okay at times but threw a back-breaking interception early in the fourth quarter. The offense was also plagued by penalties, including multiple on an early drive that resulted at one point in a third-and-30.

Trying to find hope and optimism with the Giants coming to town in six days is hard because why would you? There was nothing about this performance that was inspiring. Every NFL team puts together a few drives per game. That is not special. The circumstances around the quarterback position are brutal. There’s nothing that can be done about it. This team has to find a way. It’s their jobs.

2. The quarterback position moving forward is even more perplexing. Alex Smith and Colt McCoy are both under contract for next season. There’s a very good chance both are unavailable for the off-season program and it’s still unknown if Smith will be ready for training camp. Spending more money on the position is basically not possible. Smith costs $20 million next year. McCoy costs $3.5 million.

In one game, the Redskins have gone from a franchise that could wait and see how Smith recovered with the safety blanket of McCoy to extreme uncertainty at the sport’s most important position. I hate looking beyond the rest of the season considering the Redskins record very much still puts them in playoff position, but the reality is too hard to ignore.

3. The defense’s struggles continued. The plethora of missed tackles is becoming routine. Last year it was easy to attribute that to the attrition the defense faced. This year, they are predominantly healthy. They’re just not playing well. D.J. Swearinger said it’s going to take players and coaches. He at one point said the players are all in. When asked if that meant the other party was not, he said no, just that it would take a total team effort.

Swearinger is correct that it will take everyone, but it is the players who must execute. The defensive line, which was correctly celebrated early in the year, has been ineffective in recent weeks. They got next to no pressure on Carson Wentz and got moved consistently in the run game. That makes the jobs of the linebackers much, much harder.

They are not answering that bell. The secondary is put in a tough spot, as a result, forced to cover on the back end thanks to the lack of pass rush while also needing to be ready to come downhill and make plays in the run game. The problems are all interconnected. They start up front, but they could be fixed if others made plays. Instead, they gave up 436 yards of total offense and 28 first downs.

Stat of the day: The Eagles ran 72 plays. The Redskins ran 42.
Quote of the day: "It’s my job to be as optimistic as possible and try and get this team ready for the Giants." –Jay Gruden. The Giants visit FedExField in six days.
Follow Redskins reporter Craig Hoffman and 106.7 The Fan