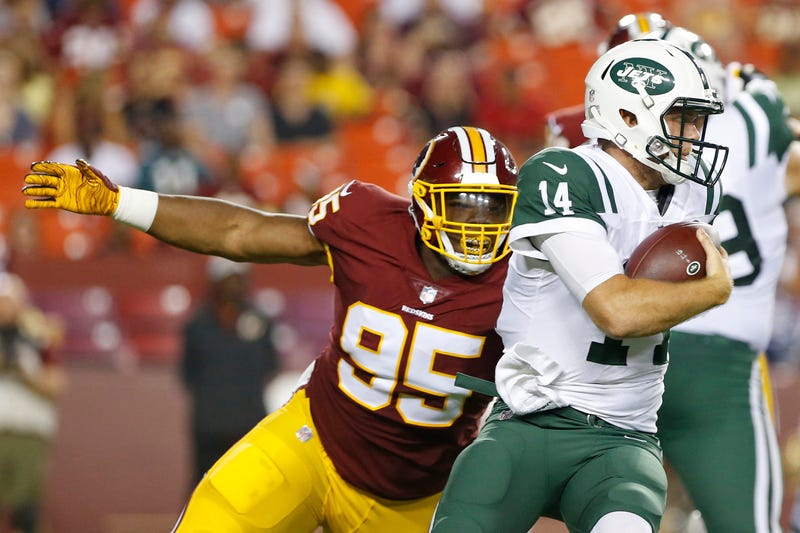 106.7 The Fan Redskins beat reporter Craig Hoffman was in the press box at FedExField as the Washington Redskins took on the New York Jets for Game 2 of the NFL preseason. He combined his observations with post-game interviews to write his top-three takeaways from this week in football:
The Redskins won. Hey, that’s nice! Here are the things that mattered from FedExField:

Stat of the day: 69 percent, as in the percentage of passes that Redskins quarterbacks completed. This offense is insanely QB friendly and even some of the incompletions were misses where receivers were running free. There was also the Sims play where the ball bounced off his hands. A hit there and you’re looking at an insane 70 percent completion percentage for the game. But hey, instead you got to make a juvenile joke during the first sentence of this paragraph. Nice.

(This is what happens when it’s 12:21 after a preseason game. It’s horrifying. I am a professional.)

Quote of the day: “I tried to call a simple play,” Jay Gruden said of his first play call which resulted in Alex Smith getting driven into the ground. “A bootleg away from all the pressure and he got hit right in the mouth, so another great call by me. I think he can handle a hit. He’s been playing for 25 years. He’ll be fine.”

Jay Gruden, ever the comedian.