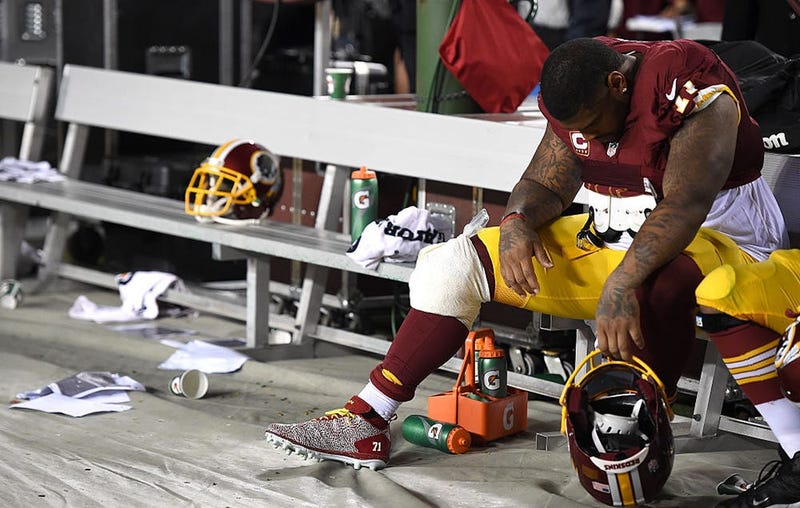 After months of silence and speculation, Trent Williams finally told his side of the story.

On Thursday, the Redskins Pro Bowl left tackle talked to the media for the first time since he skipped mandatory off-season workouts in the spring. After a holdout, he reported to the team before Tuesday’s trade deadline and spoke for about 20 minutes at his locker.

Williams confirmed the tumor on his head was cancerous, and that at one point last spring, he feared for his life.

“I almost lost my life,” Williams said. “Seriously, I almost lost my life. You’re 30 and coming off seven straight Pro Bowls and a doctor tells you to get your affairs in order, it’s not going to sit well with you. It still doesn’t. Still even thinking about it, it’s a scary thing to go through.”

A source close to Williams told The Fan Williams entered a depressed state during the immediate aftermath of being told the news by doctors. He lost weight and shut himself off. “Think how you describe to your 9-year-old, your 5-year-old that daddy might not be here,” Williams said of being told his life was in danger. “It’s tough.”

Williams says the growth on his head first appeared roughly six years ago, during Mike Shanahan’s last year as Washington’s coach. He was told the bump was nothing to worry about.

“I guess nobody took the time to see what was going on there,” Williams said. “Football was more important, and to me, it was more important too. I was told it was something minor so I didn’t really question them. But I mean the lump continued to grow over the years, it was concerning but there was no pain involved and if I’m being told by the very people I put my career in the hands of, people are telling me 'I’m fine, I’m fine.' That’s how I looked at it.”

That approach never changed with Williams, however as the growth got worse, he finally convinced the Redskins doctors to take a closer look.

“I got the team to finally get what I thought was a cyst extracted, and when they did, they found it wasn’t a cyst it was a tumor,” Williams said. “DFSP is what the cancer is called, a very rare soft tissue cancer. So they realized it was that and you know obviously five years it grew substantially than what it was when I first brought it to their attention.”

The first removal was done by Redskins team doctors at Inova, but “they kind of underestimated it and it was far more advanced than they realized,” Williams said. “I don’t think they realized how long it was there — the doctors who have seen me — so they had to send me somewhere else. That’s when I ended up going to Chicago.”

Williams went to a doctor in Chicago who was recommended to him by Redskins owner Daniel Snyder. Through all the back-and-forth with the team, Williams maintains his respect for Snyder in part because he feels that Snyder helped save his life, per a source close to Williams. It’s also why he chose not to speak out during the last six months.

“It wasn’t his fault. He’s not down there in the training room. It’s not on him. It’s not on anybody. I had a very rare form of cancer; my displeasure comes from how long it lingered and how it was neglected and how it almost cost me my life,” Williams said.

Though Williams wouldn’t outright say it, it was clear his frustration with the organization is with team president Bruce Allen and the medical staff, something that has been made clear to 106.7 The Fan by sources close to Williams throughout the last six months.

When asked if he had trust in the organization, Williams said bluntly, “No. There’s no trust here.”

When asked if the relationship between himself and Allen could be repaired, he simply said, “Next question.”

Sources in the organization expressed frustration that Williams and his agent did not clearly communicate what he wanted and how the two sides could come to a resolution. Williams disputes that.

“Well, I had a discussion with the people who I thought needed to hear it,” Williams said, also explaining why he didn’t go public during behind the scenes negotiations. “I covered that base. I didn't feel like I had to involve everybody else into my personal business, because I told the decision-makers exactly what was going on. So, I didn't want to just add the whole media aspect to it, and I wanted to respect the organization as well because I have a ton of respect for Dan and what he's done here. I love him to death. I don't have any ill-will toward him. And I don't look at it being his fault. I didn't want to — my words at that time, as much anger as I was feeling, it would've gotten taken out of context.”

The path forward is murky. There will likely be grievances on both sides. Williams took his physical at 6:30 a.m. on Wednesday and was told he passed. It wasn’t until around noon when he was told to try on a helmet and felt discomfort that the team designated his physical failed — even though the doctors had already long left the building.

“I mean I thought I passed the physical,” Williams said. “I met with the doctors to sign off on everything. Went to try on a helmet a few hours later and there was discomfort. I just had my whole head opened up. I lost 30 percent of my scalp. It's not going to feel great. It's going to take some time, so I guess they kinda seen that and got impatient with it, who knows.”

Redskins interim head coach Bill Callahan confirmed that the roster exemption granted for Williams is just two weeks, meaning that if there is no resolution before then Washington has to move Williams to the active roster, release him or put him on the Non-Football Injury (NFI) list. If he is moved to NFI, it’s possible they will not have to pay him, but it’s thought that his contract will not toll —meaning this year will count and it will not extend another season.

Depending on who comes with what results of those roster decisions will determine who files what kind of grievance and what they are trying to achieve.

Ultimately, this dispute has not become about money or health. It is about power.

“I don’t think it was in the beginning,” Williams said in response to a question about if the team’s stance had become vindictive towards him. ”It became a power struggle. It became ‘no we’re not going to fold for you as a player because that would make it seem to every other player that’s how they get business done.’ I get that part of it. but I do think it did turn that way over time.”

Williams believes that the Redskins decision to open up a trade window Tuesday for teams to try and trade for him last minute was another attempt to display their power in that regard.

Williams now waits to see what his future holds. He says he still loves football and wants to play. Callahan said they are working to find a custom helmet so that he can. However, Williams refused to say whether or not he wants to play for the Redskins again.

The power struggle goes on, and Williams used the one tool he had refused to so far on Thursday to advance his side of the story — his voice. He said a lot because he’s been through a lot. The 31-year-old has been quite literally to the edge of death and back. He survived and now he waits to see what his future holds.

Bookmark TheFanDC.com/Redskins and follow @CraigHoffman on Twitter for all the news on the Redskins.
Early timeline for Trent Williams' holdout