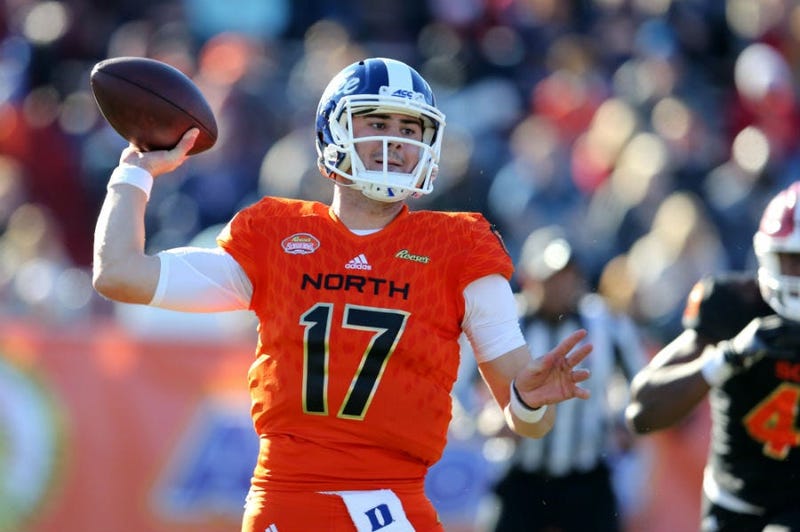 Once again at the NFL Draft, the Washington Redskins are thinking about quarterbacks.

But which quarterback will they decide on? Well, that may come down to who is doing the deciding.

"Here is what I can gather at this point, it sounds to me like there is not in any way harmony or any kind of a unanimous thought on what should be done at No. 15," Grant Paulsen said Thursday on 106.7 The Fan.

This isn't a bad thing, Paulsen notes. Disagreement among football decision-makers is a smart thing and good. However, the Redskins war room isn't like most other NFL franchises. "The (situation) in Washington is, in a lot of ways, football vs. business," Paulsen said.

On Wednesday, Paulsen heard from a source owner Daniel Snyder has "taken over the first round of the draft."

And here is where the factions in the war room take hold.

"I don't think (Gruden) wants to take a quarterback at all, for the recrod," Paulsen said.

Later on Thursday, ESPN's Dianna Russini and Todd McShay said they had also heard there was disagreement between the Redskins ownership and the coaching staff about which quarterback they liked.

The Redskins are not only in disagreement about whether to go quarterback with their top pick but which quarterback to select. While we know by now that Bruce Allen and Dan Snyder are fixated on Dwayne Haskins, there is a case being pled for Duke QB Daniel Jones per sources

ESPN's Todd McShay said he's heard members of #Redskins coaching staff are opposed to trading up for #OhioState QB Dwayne Haskins & any such move would likely be "owner driven." (Skins trade up for QB has been hot rumor for last 3 days.)

For what it's worth, the Redskins denied Wednesday taht Snyder has taken over the Redskins first-round selection.

Paulsen indicated he believes Gruden prefers to not trade up in the draft and take non-QB who contributes to the team right now. And it may be the case the Redskins will not trade into the top-5 of the draft because the price is too steep.

"I asked somebody who's pretty tied into their thinking in the building yesterday and they said it's very, very unlikely that t hey would make a pick in the top-5," Paulsen said.

The prudent move for the #Redskins is to take the best pass rusher. But if Dan and Bruce are really calling the shots (not Jay and Kyle Smith) the chances of a "butts-in-seats move" for a QB increase exponentially.