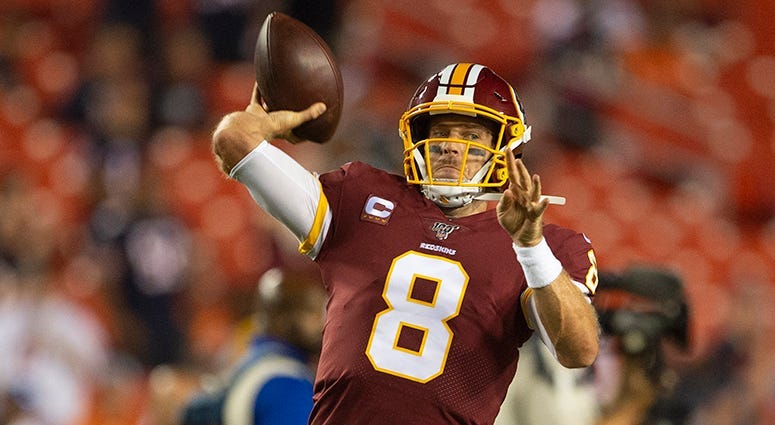 The Redskins just delivered a whooping on the Denver Broncos. They didn't even need masks to pull this heist.

Washington gained its starting quarterback for practically nothing. The Redskins exchanged a 2020 sixth-rounder for the Broncos' seventh and made Denver pay half of Case Keenum's salary. Essentially, Washington gave up a bag of balls to get their top passer so far on the roster.

This works on so many levels. First, it takes the pressure off the draft to spend the first-rounder on a passer maybe not worthy of the 15th overall selection or overpay to move up.

It gives added leverage over a possible trade for Arizona quarterback Josh Rosen. That price is now a third-rounder by Washington, or it can simply stick with Keenum.

The Redskins no longer need to overpay for a veteran free agent, like $6 million for Teddy Bridgewater. Instead, Keenum's $3.5 million under the salary cap. Perfect for increased cap flexibility to maybe try for one prominent free agent.

Best of all, Keenum is a decent quarterback. Definitely better than his resume of four teams over the past five years. Given the turnover, he was an amazing 26-28.

Forget last season in Denver. GM John Elway can't find a passer like himself. At best, Elway caught one decent year with Peyton Manning, and that wasn't the season when the latter was on the Super Bowl winner as a one-armed bystander. Keenum went 6-10, but threw for 3,890 yards with an 81.2 pass rating.

Maybe quarterback whisperer and coach Jay Gruden can make Keenum work in Washington like the passer fared in 2017 in Minnesota, when coming a breath short of the Super Bowl. Keenum was 11-3 with a 98.3 pass rating. That the Vikings opted to sign former Redskins quarterback Kirk Cousins over keeping Keenum doesn't look like the better move in hindsight.

Keenum is only a stopgap move on a franchise that can't get past .500 (and that's a big improvement over much of the last quarter century.) Surely, Gruden will try to start incumbent Colt McCoy. Maybe even Rosen if the team trades for him. But Keenum is the best passer Washington has, and eventually Gruden will admit it if he wants to stay for the last year on his deal in 2020.

And then Denver will wonder why it went with Joe Flacco while letting Washington raid its roster.