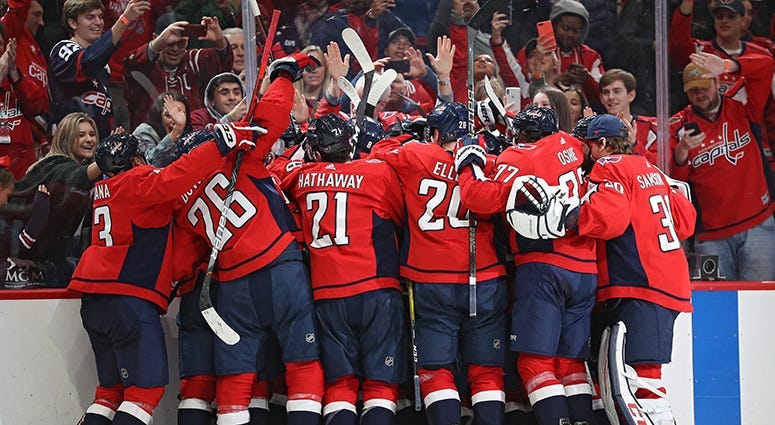 The key to the Capitals maintaining their sweltering pace throughout the 2019-20 season is simple, Carl Hagelin says.

"I think it comes down to just the personnel we have in the locker room," the Caps center said during his return appearance on 106.7 The Fan's Grant & Danny, presented by F.H. Furr. "We're winners. We love winning games."

"That's what it comes down to," he said. "Everyone wants to play their best game, and if one guy doesn't have a good game, you know he's gonna bounce back the next time. And a team like that, it makes it easy to come to the rink and try to get those two points every night. There's good competition within our team and that helps you push each other to be better every single night and that's still our plan."

"We haven't done anything yet, to be honest," he provided a necessary caveat. "We've got to keep getting better. We know it's a long season, but we're focused in on the here and now right now and trying to get more wins."

The Caps boast the best road record in the NHL at 14-2-1, which has only added to their dominance as the league's top team, with 49 points through 32 games.

Asked what makes them so special on the road, Hagelin said, "It's a good question. First of all, I think we've shown a lot of character on the road. We've been down a couple games and found a way to win those games."

"I think just overall we've won games in many different fashions on the road," he said. "I think we're playing well. We've done a good job with our special teams as of late and that's key on the road. We're keeping it simple and we're just trying to get two points every night."

Hagelin missed 11 games – which amounted to almost a month of the season – with an undisclosed upper body injury before finally making his return in last week's win over San Jose. Getting back into the lineup after such an extended hiatus presents some challenges.

"Well, I think first of all, it helps when the team's playing well," said Hagelin. "You can just go in and do your thing. It's always easier to play on a team that's winning and on a team where guys have some swagger and are feeling good about their game, so that definitely helps.

"I think for me, I'm just trying to go out there and get involved early. That's the one thing you can't really do when you're skating alone. You want to get back in and you want to get some hits, even get hit a couple times just to get your timing back and just get that feel with the puck and a bunch of people around you. That's the one thing that usually takes some time for me."

Capitals teammate John Carlson has been scoring at such a blistering pace, he's beginning to garner consideration beyond just the Norris Trophy – awarded to the league's top defenseman. Some believe Carlson deserves consideration for the Hart Memorial Trophy, an award that hasn't gone to an NHL defenseman in 20 years.

Asked if the team's even surprised by Carlson's play at this point, Hagelin said, "I mean, it's hard to say that he's surprising us because he's been doing it all year, you know? He just keeps it going and we're kind of getting used to it."

Carlson last week strung together brilliant offensive performances on back to back nights, in San Jose and Los Angeles, respectively, tallying three points in three minutes against the Sharks, and then scoring two goals in the first period the next night against the Kings, the difference in the 3-1 Capitals victory.

"What he did (in LA) was amazing – he looked like an 80-goal scorer," Hagelin said. "I think most importantly, the way he's playing defensively, he doesn't have to spend too much time in his own end because he's playing so well. He's a big body, protects the puck well and he's super smart and good with his stick, so there's a lot of different things that he does extremely well and I'm fortunate to be right there and see it."