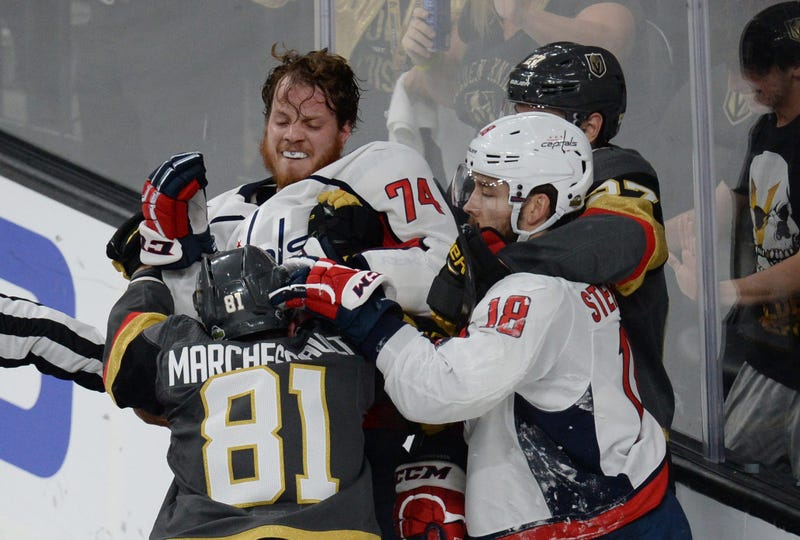 Capitals center Chandler Stephenson regaled The Junkies with the story of his first hockey fight Thursday and, boy, was it a doozy.

Making his weekly Tuesday appearance – The Morning Skate, presented by D.C. Lottery – Stephenson was asked about his first fight. He was surprisingly accurate with the details, so it must have made quite the impact on his young, impressionable mind.

"Funny, because it was kind of the similar story to the one that Lars had," Stephenson said. "It was Mike Modano Night in Prince Albert."

Thanks to the magic of the internet, we were able to find the box score from that game, along with a press release from the Prince Albert Raiders

Using the magic of the internet, we were able to find the press release from the Prince Albert Raiders (WHL) announcing Mike Modano Night on Nov. 1, 2013. And using that as a guide, we were also able to uncover the box score of the game between the Raiders and Stephenson's Regina Pats.

"I think they were retiring his jersey in Prince Albert and we were down like 7-nothing or something," Stephenson said. "And then when they scored, our goalie blockered somebody and just kind of all hell broke loose."

"A little line brawl and everybody was grabbing somebody," he said. "I think there was like seven or eight minutes left in the third period and it was 7-nothing. Yeah, we were getting pumped, so..."

"Something had to happen," Eric Bickel said.

Asked if he took any damage or administered it out, Stephenson said, "I'd like to say I gave damage, but who knows? It was late in the game and end of our shift and they just scored again."

"Some other guy just asked me to fight, because I think there was two other fights going on," he said. "We both just dropped our stuff. The refs came into ours first, but there was a couple that went a little long and one of our tough guys on the team, Dyson Stevenson, he had some young kid and was like throwing him into the ice and he was yelling out for the refs and it was just a gong show."

Dyson Stevenson was actually assessed two separate five-minute majors, the first 4:52 into the third period, and then again, in the much larger seven-person brawl that came with six minutes remaining in regulation. And Chandler Stephenson is mostly on point, in that Prince Albert had just scored its final goal 31 seconds before the big melee, to make it 7-1.