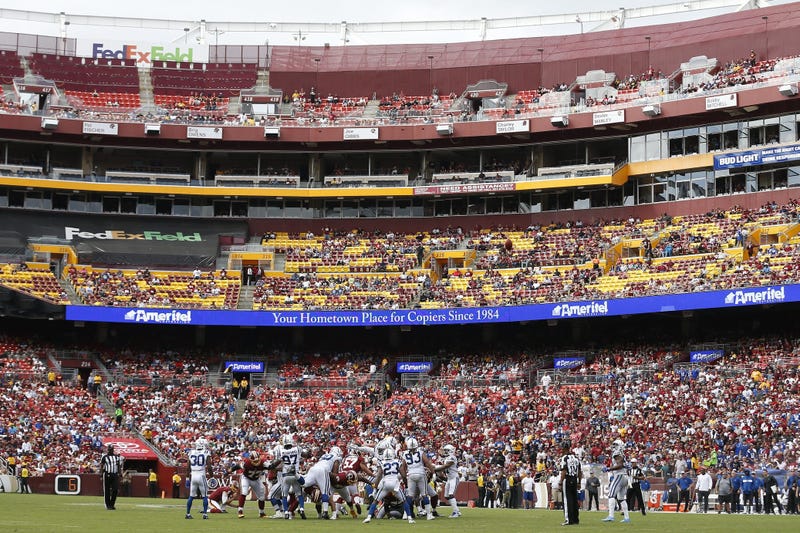 Redskins fans turned out their poorest showing in FedEx Field history for Sunday's home-opening loss to the Colts, and Chris Thompson isn't happy about it.

An announced attendance of 57,013 left the stadium looking empty on the CBS broadcast. Redskins players, Thompson says, could hear fans booing the product on the field, which resulted in an unflattering 21-9 loss.

"I think, as players, we go out there, we want a loud crowd, we want a crowd out there to give us a boost," the running back told reporters Monday, when asked if he noticed the half-empty crowd. "When their offense is on the field, put them in situations where the communication may be off because they can't hear and things like that, and we didn't have a good turnout."

"Me, I noticed it," he said. "I also noticed the boos we got as well, and that's not something that I'm a real big fan of. If you're a fan of a team, you shouldn't be booing them, whether we're doing good or bad. We understand as players that we're not performing how we should. You don't have to boo us to let us know – we're out there on the field.

Thompson – who picked up 92 yards on 13 catches, and an additional yard on four carries – accounted for roughly one-third of the Redskins offense.

"The one thing you should be doing, in my opinion, is cheering us on," Thompson said. "But, you know, it is what it is. As a team, we just gotta have a better showing than that, I think. Our offense is better than what we showed. For me, I gotta make bigger plays. I gotta make some guys miss when Alex puts the ball in my hands as much as he did yesterday, and that's pretty much it."

Asked if he felt like the fans affected the team's performance in some way, Thompson said, "I wouldn't say it affects us as a team, but I know we want to have our stadium packed out. That makes us feel good. It makes us feel like we've got the support of the people here in this DMV area. And for it to be as empty as it was, to me, it was a little bit of a shock. I'm hoping it was because of the weather, or what was supposed to happen with the weather.

"We've got another one Sunday, so we'll see. Like I said, I always want the crowd to be there to have our backs and be cheering us on, because that definitely I think is a boost for us, for sure."

While Thompson says players weren't discussing it on the sideline, he did acknowledge, "I think every individual player just kind of looks around and notices it."