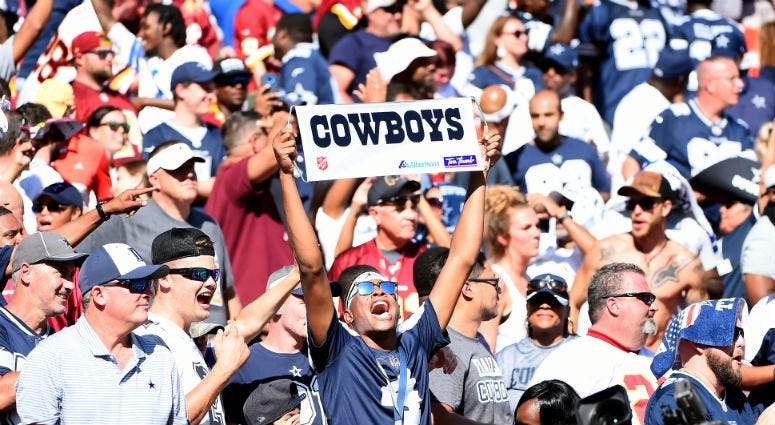 Photo credit Will Newton/Getty Images
By Brian Tinsman, 106.7 The Fan

It wasn't long ago that the home opener, or "Dallas Week," was a hot ticket for Washington fans, or when sports radio callers said: "The Redskins can go 2-14, as long as they beat the Cowboys twice."

Those felt like distant memories when half of the 75,128 fans in attendance on Sunday wore Cowboys gear and cheered for the road team. It wasn't even that surprising.

When news emerged midweek that FedEx Field could sell out for the home opener vs. Dallas, there wasn't much optimism that Redskins fans were buying tickets. The Cowboys, coming off a Week 1 home win over the Giants, were invading.

On Sunday, bad optics of blue jerseys around the stadium turned into a sad soundtrack from the stands. So much for home-field advantage.

On a critical fourth-and-4 situation in the fourth quarter, Cowboys defenders waved their arms for fans to pump up the volume. It got noticeably louder in response.

It almost sounded like fans booed when Dak Prescott hit Amari Cooper for a second-half touchdown. Instead, it was just Dallas fans bellowing "Coop" in unison.

"We have a great fanbase. We're so appreciative of the fans we have in Dallas, all throughout Texas, and really, all across the country," Cowboys head coach Jason Garrett told the media after the game. "We take great pride in preparing the right way and playing the right way because we have such great support wherever we go."

Great fan support on the road, in a rival city, for that team's home opener. Garrett is just being polite.

Even at its best, FedEx Field isn't built for home-field acoustics. Removing seats and increasing fan experience still resulted in a Sporting News article in May naming it the NFL's worst stadium.

The reality is that this will happen again this season, especially if the Redskins can't bounce back from an 0-2 start. The Patriots and 49ers also have national fan bases. The Eagles and Giants both travel well.

From a crowd noise perspective, the Redskins could be at a disadvantage for 13-of-16 games this season.

Fans seem unlikely to show up if the team doesn't win. The team is less likely to win if supportive fans don't show. It's a chicken-or-the-egg scenario for fan apathy and it's only Week 2.